Bayern Munich survived a Borussia Dortmund fightback to win the German Supercup in Munich. Joshua Kimmich scored the late winning goal in a five-goal thriller to earn Hansi Flick's side yet more silverware. 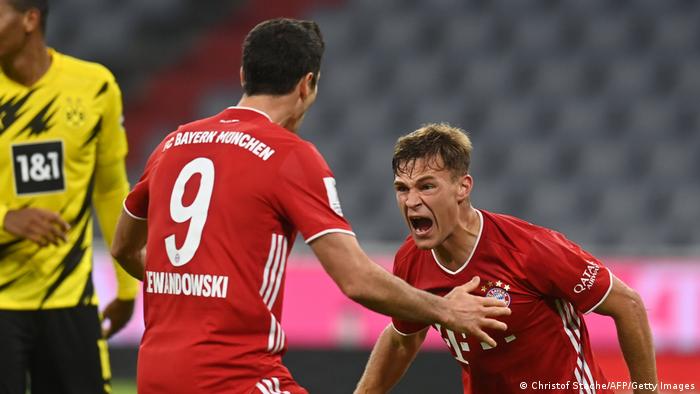 Bayern Munich may still be adjusting to life after Thiago Alcantara, but the man who took the No.6 shirt from the Spanish midfield maestro, Joshua Kimmich, was Bayern’s match winner again. It wasn’t a majestic goal like his title-clinching strike in Dortmund in May, but it was enough to secure Bayern their fifth piece of silverware in under five months — even if the merits of the game itself are open to debate.

Bayern’s winning mentality is embodied by the "Rottweiler from Rottweil", the German town from where Kimmich hails. The 25-year-old is often compared to club legend Philipp Lahm, but he is very much his own man.

His aggression and sheer refusal to be beaten is what pushed Bayern over the line here. His mugging of a tired Thomas Delaney was followed by a lung-busting run, exchange of passes with Robert Lewandowski, and scuffed finish after goalkeeper Martin Hitz had denied his initial effort.

It was a vast improvement on Bayern’s shock 4-1 defeat at Hoffenheim on Sunday, but this still wasn’t vintage Bayern. They raced into a 2-0 lead courtesy of a sensational counterattack finished by Corentin Tolisso and a Thomas Müller header, only to let it slip. Bayern looked tired, which is hardly surprising, and the upcoming international break will come at a good time for Hansi Flick and his players.

Favre had lost his previous two trips with Dortmund to Munich 4-0 and 5-0, so to only lose 3-2 represents some kind of progress, one could suggest. But despite being without Jadon Sancho, diagnosed as sick and unable to travel to Bavaria, Dortmund were ultimately too easily cut open and unable to control the game in midfield. 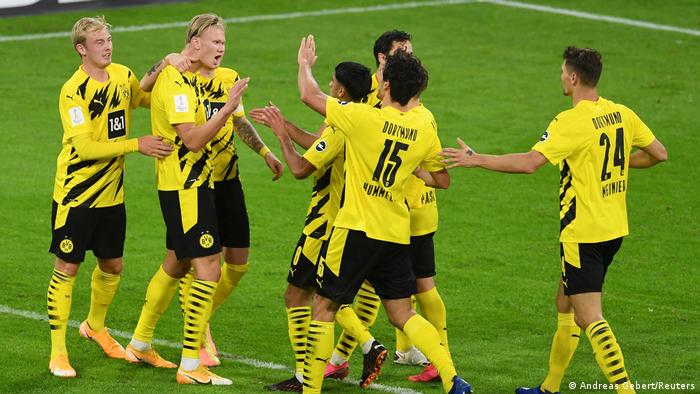 Erling Haaland celebrates making it 2-2, only for Dortmund to let it slip late on.

There was one ray of hope in the shape of the supremely talented Erling Haaland though. Isolated and frustrated in Augsburg at the weekend, Haaland was a man on a mission in Munich. Dropping deep to join the buildups, the Norwegian saw more of the ball and laid on an assist for Julian Brandt, which got Dortmund back into the contest.

It was after the break that Haaland truly came alive though. Collecting Delaney’s pass, Haaland took a single touch before rifling an early shot beyond Manuel Neuer to make it 2-2. The hulking figure of Dortmund's center forward had the beating of Niklas Süle and Lucas Hernandez at this point, and Dortmund sensed a third if they could get the ball to their lead marksman. They managed it again a few minutes later, but this time Haaland was denied by Neuer from a similar range, with Neuer making a fine stop.

Things could have been different for Dortmund had Thomas Meunier not blazed over a big chance and Favre not withdrawn Haaland to keep him fresh and healthy for the games ahead, but ultimately Kimmich, and his irrepressible will to win, proved the decisive factor.

82' GOAL Joshua Kimmich scores an unbelievable goal. After being denied by Marwin Hitz, he flips the ball into the back of the net while going to the ground. Wow. Bayern Munich 3, Borussia Dortmund 2

69' Renier sets up a chance for Felix Passlack, now playing on the right, but Renier is flagged for offside-

66' Yellow card Lucas Hernandez is booked for his challenge on Erling Haaland. It was a tackle Hernandez had to make as Haaland would have been through on goal.

62' Borussia Dortmund is on the front foot now, pressing Bayern Munich's defense. This game is very much up for grabs.

59' Erling Haaland with another terrific chance to score. Marco Reus plays him through, but Haaland's effort is stopped by Manuel Neuer this time.

56' EQUALIZER Erling Haaland levels the score. Thomas Delaney plays a terrific pass to the Norwegian striker, who finishes from the top of the box. Bayern Munich 2, Borussia Dortmund 2 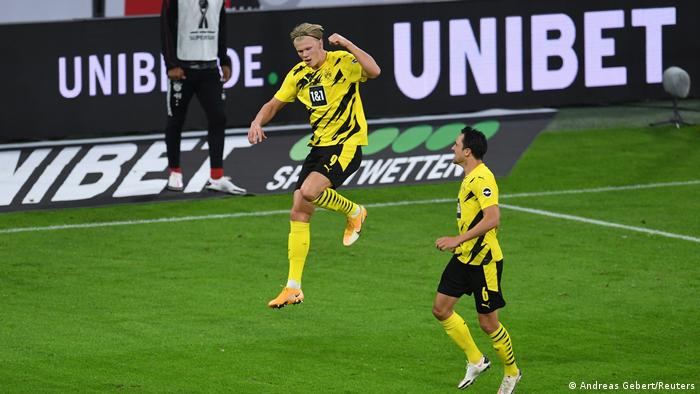 47' Thomas Meunier finds himself completely free on the right wing, but his shot flies way over the bar.

38' GOAL Julian Brandt puts Dortmund on the board. A bat turnover from Benjamin Pavard turns into a quick scoring chance for the visitors. Erling Haaland finds Brandt at the top of the box, who hammers a shot into the back of the net. Bayern Munich 2, Borussia Dortmund 1 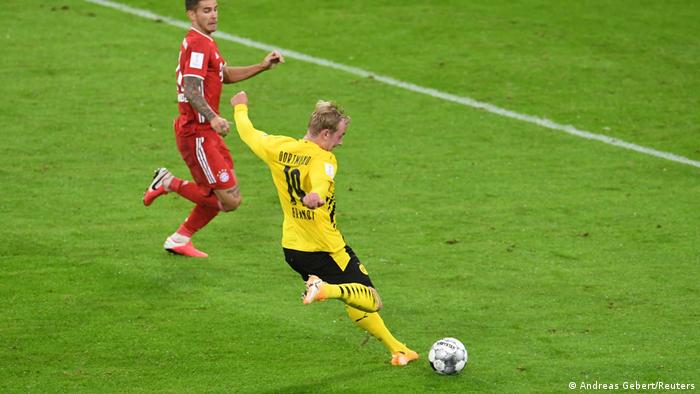 32' GOAL A cross from Alphonso Davies on the left flank find Thomas Müller at the far post. The veteran forward does the rest. Bayern Munich 2, Dortmund 0

25' Marco Reus has another chance on the break after Erling Haaland thrusts the ball forward, but Niklas Süle gathers the ball and clears it from danger.

24' Marco Reus has a terrific chance to level the score, but his low drive is brushed aside by Manuel Neuer

22' Joshua Kimmich finds himself free at the top of the penalty area and lets one loose, but Marwin Hitz bats it away. 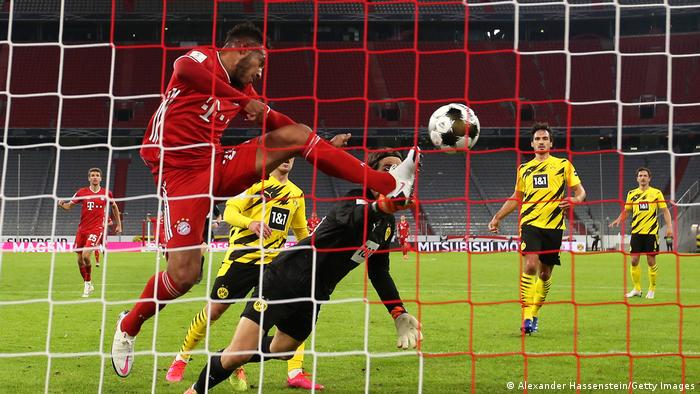 17' Marco Reus is played into the box on the left. His right-footed shot deflects of Niklas Süle and into the side netting. Brandt's ensing corner is cleared by Benjamin Pavard at the far post.

11' Erling Haaland finds himself in space in the box, but he turns the ball over trying to cut it back near the goal line.

10' First chance for either side. Joshua Kimmich heads a cross from Thomas Müller toward goal, but right at goalkeeper Marwin Hitz.

7' Bayern's defense is very flexible. Javi Martinez is shuttling between midfield and defense, while Lucas Hernandez playing a hybrid of center and left back.

Steinhaus has long been breaking down barriers in her profession and is set to do so again tonight, becoming the first female referee to officiate a men's final in German football. However, tonight's game will also be a farewell game for the 41-year-old’s last, who has decided to hand up her whistle as she looks to prioritize her personal life.

Read more: "Being a referee is about quality of performance, not gender"

Not everyone will be able to see her final game. According to Iran News Wire, a news website dedicated to the Middle Eastern country, Iranian state television is not broadcasting the DFL Supercup because Steinhaus is officiating the match.

From the captain's mouth: Marco Reus

"We're going up against the best team in Europe. It's a good chance to see where we currently stand."

"It might be 'just' the Supercup, but we are playing against Bayern so it's always a prestigious game. That's why we can't afford to take it easy at any point."

From the coach's mouth: Hansi Flick

"The mentality of my team is exceptional. Perhaps one or two members of the team were and still are a bit tired, but they still give 100 percent on the field."

Dortmund have a fantastic and young team, but with plenty of experience. They play attractive football, with a strong attacking drive. I like that. We have the chance to measure ourselves against the best in Germany. This game will develop us."

Leroy Sané is out for this one with a knee capsule injury that will likely keep him out of the international break next week too. David Alaba is a doubt (muscle problems).

Both teams are coming into this one having played three games this season (two league, one cup), which is not normally the case. The German Supercup is usually the season opener. That will not be the case this year, as a result of the coronavirus pandemic. For the same reason, there will also be no fans in attendance as the infection rate in Bavaria continues to rise.

Both teams are also coming in off surprising defeats. Bayern lost for the first time in 2020 on Sunday after being overrun by an aggressive and physical Hoffenheim team. Dortmund enjoyed 80% of the ball in Augsburg but were left on the wrong side of a 2-0 scoreline.

When Dortmund have played Bayern in the Supercup, they have won four times to Bayern's three.

The pair met in the Super Cup just last year where Jadon Sancho once again proved the difference. The Briton made the first for Paco Alcacer and then scored the second. August 2019 feels like a long time ago, doesn't it?