Days after securing the Super Cup, Bayern Munich were run out of Sinsheim, suffering their first loss of December 2019. With fixtures galore in the coming weeks, the treble winners showed they may struggle to keep up. 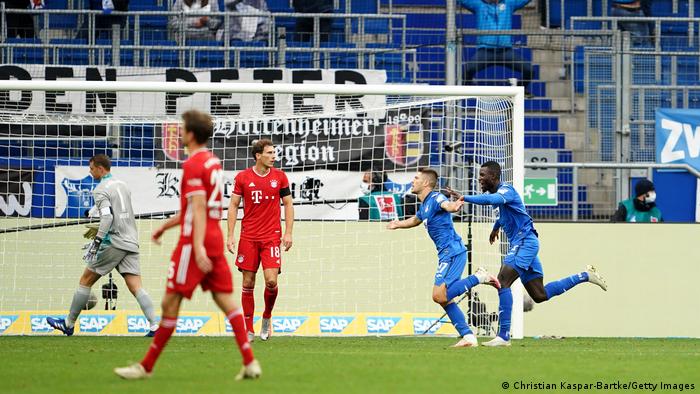 For the first time this year, Bayern Munich looked tired from winning.

Their game on Sunday against Hoffenheim came three days after securing their fourth piece of silverware in 2020 with the UEFA Super Cup. It showed, with Hoffenheim running the treble winners off the park to hand them their first loss of the year.

Bayern's passes were flat. Running appeared to be a chore. When Hoffenheim exposed their high line, the Bavarians had no answer. In truth they had very few answers to most of the excellent game plan Hoffenheim head coach Sebastian Hoeness (the former Bayern Munich reserve team coach) had designed.

And so ends their unbeaten run in 2020, with heads hung and legs tired.

Even with fresher players though, Bayern struggled to get into the game. Not until Ermin Bicakcic's header from a corner found the back of the net did the Bavarians finally appear interested. A previously sauntering Joshua Kimmich began running to the corner flag to take the set-piece, and Leroy Sane was finally trying to use his pace to run directly at Hoffenheim defenders.

Nevertheless, Hoffenheim remained the more spirited team. Every won ball was quickly thrust forward to the attacking trio of Christoph Baumgartner, Munas Dabbur and Andrej Kramaric. It was Dabbur that pounced on a poorly placed backpass from Benjamin Pavard to double Hoffenheim's lead.

Although Bayern got a goal back before halftime, they were clearly a step behind their opponents. Second balls they would normally collect were falling at the feet of the opposition. Their suffocating pressing in the final third was replaced with lackluster canters after the ball.

After the break, Flick began replacing players just when they were starting to wilt. Pavard and Sane plodded off the field as they were replaced by Goretzka and Kingsley Coman.

The fresh legs — not so fresh in Goretzka's case — only marginally helped. And in the last quarter of an hour, Hoffenheim put the hammer down. Substitute Ihlas Bebou ran at Bayern's weary defenders, setting up Kramaric for a goal and then winning a penalty in injury time.

Tired or just a bad day?

The final whistle appeared to come as a relief for the defending league champions. As the teams filed into the dressing room, Serge Gnabry stayed behind, looking across at an empty away stand, seemingly trying to figure out what had just happened.

Despite overwhelming evidence to the contrary, Flick smirked at the suggestion that his team's lackluster performance was down to tiredness.

"I won't put it all down to fatigue," he said in his press conference afterwards. "We did not play with the dynamic that we can play with. Today it was down to the opponent, and it was very good today."

Even if Flick won't acknowledge his team's weariness, the topic won't disappear. Off the back of their abnormally brief four-week off season, Bayern play twice a week for the foreseeable future. The DFL Super Cup against Borussia Dortmund is in just three days time and it will be their third game in seven days.

In other words, the opportunity will be there for teams like Hoffenheim, teams who are willing to be aggressive and risky, to run the treble winners into the ground. If they do, Bayern's first loss of 2020 is unlikely to be their last.