Several Young Alternative chapters have become increasingly close to anti-Semitic, far-right groups like the NPD and Identitarians. Now, top AfD leaders are wondering whether the party's youth wing should be dissolved. 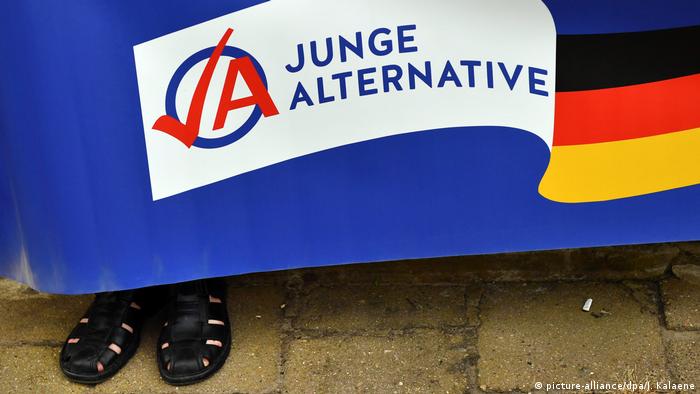 The right-wing Alternative for Germany (AfD) party is so worried about its youth organization becoming radicalized that there are calls to disband it entirely, according to German media reports on Monday.

The Junge Alternative (Young Alternative or JA) has become increasingly close to the radical Identitarian movement (IB) over the past years, and several JA state chapters are being surveilled by intelligence services over concerns about extremism.

Identitarians across Europe propagate several ethno-nationalist and anti-Semitic conspiracy theories. They promote the neo-fascist idea of ethno-pluralism as an antidote to multiculturalism. Although the IB remains a fringe movement, German authorities have repeatedly raised concerns that IB adherents are becoming increasingly well-armed, radicalized, and more numerous.

Close ties to IB and the neo-Nazi NPD have the authorities already keeping a close watch on the JA organizations in the states of Baden-Württemberg, Lower Saxony and Bremen. At the same time, JA social media groups have begun spreading increasingly racist and xenophobic content, including the claim that immigration from Africa was bringing "man-eating cannibals" to Europe.

According to the Frankfurter Allgemeine, the situation has been getting so out of hand that the top brass of the nationalist AfD is considering dissolving the JA. Deputy party leader Georg Pazderski has suggested cutting ties to some chapters or exercising more direct party control over them.

But the JA might be doing the AfD's work for them. Disagreements over maintaining relationships with the NPD and IB have reportedly begun to erode JA chapters, with as many as 70 functionaries resigning in Baden-Württemberg alone.

Later on Monday, the AfD said in a press release that they were taking "individual inhumane statements from some JA members" seriously and that they expected these people to step down. They also confirmed that the situation will be an important topic of discussion at their next federal convention.

German prosecutors have opened a formal probe into AfD leader Alice Weidel over alleged election campaign donations from Switzerland. It is illegal for German parties to receive contributions from non-EU countries. (20.11.2018)

TV viewers in Germany watching a popular quiz show were left flummoxed when a news ticker appeared to show the projected results of the German election two days before polls opened. Far-right leaders seized the moment.