German prosecutors have opened a formal probe into AfD leader Alice Weidel over alleged election campaign donations from Switzerland. It is illegal for German parties to receive contributions from non-EU countries. 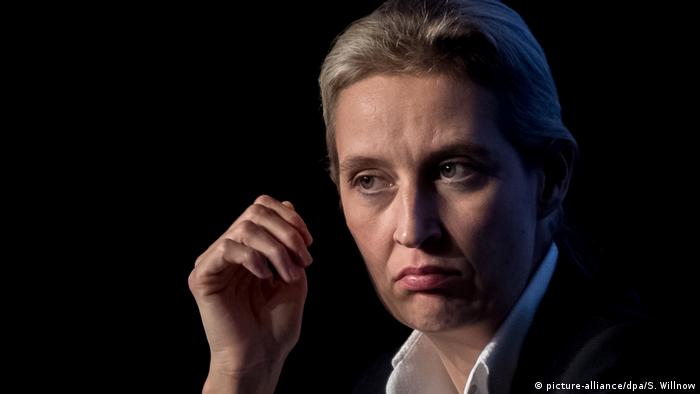 Alice Weidel, the parliamentary group leader of the far-right Alternative for Germany (AfD) party, is being formally investigated for violating campaign finance laws, the public prosecutor's office in the southern city of Konstanz announced Tuesday.

The AfD branch in Lake Constance is accused of receiving large sums of money from a Swiss company in the leadup to Germany's 2017 general election. The vote saw the AfD become the largest opposition party in the Bundestag.

The prosecutor said the probe would target Weidel and three other AfD officials in her Lake Constance constituency.

In a meeting on Friday, the AfD's federal executive backed Weidel and dismissed the allegations against her as baseless.

Under Germany's strict party donation laws, it is illegal to accept campaign contributions from states outside the European Union. Parties that break that rule face a financial penalty of three times the amount received.

Weidel said she returned the money to the Swiss donor after having doubts about its legality. But the repayment reportedly only took place in April 2018, and was around €8,000 less than the initial donation.

Some of the money was reportedly spent on social media advertising and legal fees during the election campaign.

The far-right AfD reportedly knew about donations from a Dutch foundation earlier than previously thought. Leading party member Alice Weidel is already facing an investigation over another questionable donation. (16.11.2018)