Prosecutors have begun a probe into AfD leader Alice Weidel over the alleged use of foreign donations to pay for internet campaigning. The party received large sums of money from donors in Switzerland and Belgium. 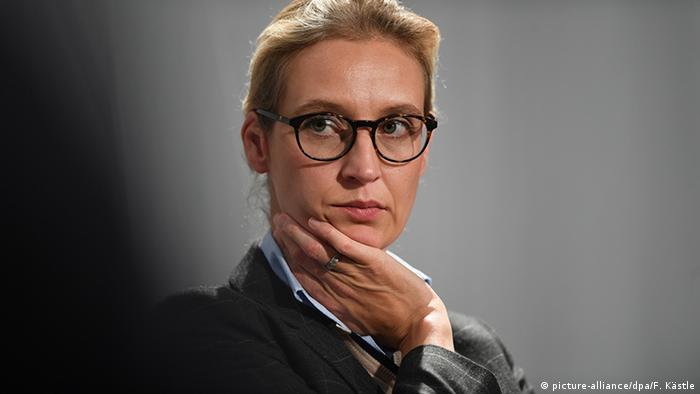 Prosecutors in the southern German city of Konstanz said on Wednesday that Alice Weidel, the parliamentary group leader of the far-right Alternative for Germany party, was under initial suspicion for breaching Germany's strict party spending laws.

Prosecutor Andreas Mathy told DPA news agency that his office had sent a letter to the Bundestag, Germany's parliament, requesting the lifting of Weidel's parliamentary immunity. A formal investigation could begin as early Friday.

German newspaper Süddeutsche Zeitung (SZ) and public broadcasters NDR and WDR reported on Sunday that the AfD branch in Lake Constance had received around €130,000 ($147,000) in campaign donations from a company in Switzerland shortly before the 2017 general election. Lake Constance is the southern German district where Weidel, who divides her time between Germany and Switzerland, lives with her partner and children.

Zurich-based PWS PharmaWholeSale reportedly said that its chief executive had transferred the money for an anonymous business associate.

It sent the money in 18 tranches to avoid infringing German party spending laws. Germany restricts foreign donations from non-European Union countries to German citizens living outside the EU. Parties that contravene that rule face a financial penalty of three times the amount received.

Weidel said she had doubts about the legality of the donations in September and sent the money back.

But the repayment only took place in April 2018, according to SZ, NDR and WDR. The total transferred was around €8,000 less than the amount Weidel's office had received.

The local AfD treasurer who approved the repayment told DPA that she had "overseen" the absence of the remaining €8,000. She said she first became aware of the mistake when German media began reporting on the incident earlier this week.

Late on Wednesday, it emerged that the AfD's branch in Lake Constance also received another large donation from the Netherlands.

In a statement, the party said the branch received €150,000 from a donor identified as "Stichting Identiteit Europa" in February this year.

Although the AfD believes the money could have been accepted, the party returned the full amount in May, three months after receiving it.

"The AfD's Lake Constance chapter was unable to determine the donor's identity or the donor's motive without any doubt, which is why it ultimately decided not to accept the money from "Stichting Identiteit Europa," the statement read.

The party defended its decision to not disclose the donation to the Bundestag — the lower house of the German parliament — since the money was eventually sent back.

According to the German law, a party must immediately inform the Bundestag if it receives more than €50,000 from a single donor.

Some of the donation was reportedly spent on social media advertising and legal fees during the election. The AfD confirmed that some payments had drawn on the donation before it was returned to Switzerland.

"I don't think that she has to blame herself [for this]," he told German daily Bild. He said the treasurer who checked incoming campaign donations had "clearly acted improperly," but admitted that the repayment had occurred too late.