Alice Weidel reportedly received €130,000 in campaign donations from Switzerland ahead of 2017 elections. The AfD co-leader's political rivals are now gunning for her resignation. 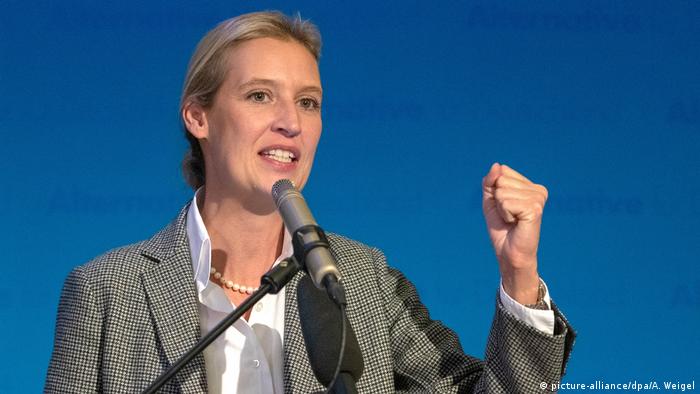 The co-leader of the far-right Alternative for Germany (AfD) party received dubious donations for her campaign in the runup to German general elections in September last year, German media has reported.

Alice Weidel's district office near Lake Constance received a total of €130,000 ($150,000) in several tranches of mainly 9,000 Swiss franc amounts ($8,900, €7,900) between July and September 2017, German newspaper Süddeutsche Zeitung and broadcasters NDR and WDR said, citing bank statements. The donations were made by a Swiss pharmaceutical company.

Weidel, who was the party's lead candidate in the elections, said that she first learned of the "unsolicited" donations in September last year and decided to return the money after having doubts about its legality.

On Monday, she clarified that "the account the donation went to was the official account of the Lake Constance district office" and that the money "did not go to me directly." She ruled out what she called "personal consequences," hinting that she will not resign over the affair.

But the repayment did not take place until April 2018, according to the report, and the amount returned was some €6,000 less than the amount originally received.

Germany allows political parties to receive funds from non-EU countries only if they come from German citizens.

The donation was "unquestionably an illegal party donation because it came from outside the EU," campaign financing expert Martin Morlok said.

Moreover, according to the German law, a party must immediately inform the Bundestag — the lower house of the German parliament — if it receives more than €50,000 from a single donor. The unidentified donor appears to have transferred the funds in smaller tranches to circumvent this rule.

The Bundestag has not yet responded to the report.

The AfD, which has been repeatedly accused of bending campaign financing rules, faces a hefty financial penalty if the donation is deemed illegal. Anyone who accepts an illegal donation must transfer three times the amount to the Bundestag president, Morlok said.

The report sparked strong reactions from Germany's center-left parties. Green party politician Britta Hasselmann said the donation appeared to be dubious and demanded that all facts be put on the table.

"If the donation was illegal, Weidel must resign," he said.

She’s young, she’s unflappable and she’s perhaps the savviest AfD politician when it comes to the media. DW looks at how the right-wing party’s co-candidate, Alice Weidel, has flummoxed Germany. (04.09.2017)

The AfD is a challenge for the whole political system in Germany, not only my party.

Maybe it could be called an alternative for euroskeptic fundraising, as opposed to Germany. The AfD's online gold shop, set up to bolster finances and thereby ensure more state assistance on top, has come into question. (21.11.2014)

What has the media got wrong about the AfD?