As Schleswig-Holstein went to the polls, the nationalist AfD was again supported by a heavily funded independent campaign organization. Anti-lobby groups say it's wrong - no one knows where the money's coming from. 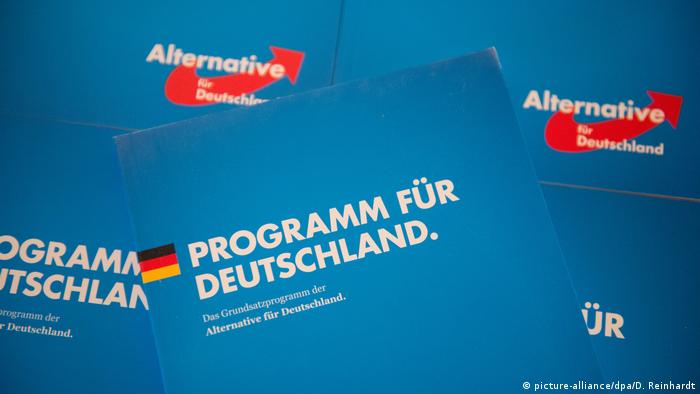 Germany’s rightwing populist AfD Party wants to continue to be whatever German voters wish them to be. But staying wide open to the extreme right may prove risky in September elections. (24.04.2017)

Ahead of Sunday's election in Schleswig-Holstein, hundreds of thousands of voters received a free newspaper in their mailboxes. The ten-page "Extrablatt" contains articles with headlines including "30,030 euros per month for a Syrian refugee family," "The asylum industry, a billion-euro business," and another describing the Social Democratic Party (SPD) chancellor candidate Martin Schulz as "Greedy, loudmouthed, self-aggrandizing." The paper also includes a "party-check," which grades the various parties' policies before coming to an unambiguous conclusion: vote for the Alternative for Germany (AfD).

But Germany's most successful nationalist, populist, far-right party since World War II doesn't distribute the "Extrablatt" - it's paid for and produced by an opaque organization called the Verein zur Erhaltung der Rechtsstaatlichkeit und der bürgerlichen Freiheiten ("association for the preservation of the rule of law and civil freedoms").

Set up last year, the association provided the AfD with similar support - including thousands of billboard posters - in four of last year's state elections (in Baden-Württemberg, Rhineland-Palatinate, Mecklenburg-Western Pomerania, and Berlin), and is now setting its sights on the election in Schleswig-Holstein, and, next Sunday, Germany's most populous state, North-Rhine Westphalia.

Where does the money come from?

The association refuses to discuss its finances, but some media outlets have calculated that producing the "Extrablatt" - which has a circulation of 2.6 million in NRW alone - and the many thousands posters, would have cost at least a million euros ($1.1 million) last year. That's a considerable boost for the AfD, which only collected 2.3 million euros via its own donations in 2016.

As far as the anti-lobbying group LobbyControl is concerned, this is bending campaign financing rules, and violating the spirit of Germany's constitution. "This association has large-scale influence on elections, and it's completely non-transparent who is behind it," LobbyControl researcher Ulrich Müller told DW. "Such hidden influence on elections simply shouldn't exist in a democratic system."

German law requires all party donations of over 10,001 euros to be declared publicly, but as an independent club, the Verein effectively offers businesses and other large donors a way to fund a nationalist party without having their reputations stained.

On the concrete intentions about why people donate to us, I can't tell you anything," Bendels added. "We don't do surveys - we don't ask people: why are you donating to our association?"

Bendels said the association currently has over 14,000 supporters, and has received donations from 10,000 of those.

But Müller believes that the majority of the association's donations come from large donors. He also described the association as "relatively dubious." "It was founded out of nothing by certain large donations, but we don't know where the money came from," he said. "We don't really see who is behind it - whether Bendels is really the person who decides what happens."

For his part, Bendels insists that there is no mystery, and certainly no secret collusion with the AfD. "I want to say this very clearly: there are absolutely no arrangements with the AfD when it comes to our campaigns," Bendels said. "I sometimes talk to AfD politicians, and meet AfD politicians at events to which I have been invited as a guest speaker, but I've never spoken to any AfD official about any concrete campaigns or actions by the association. That's never happened and will never happen." 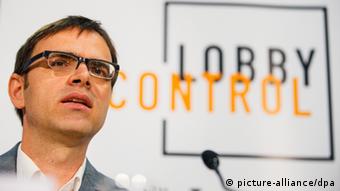 Müller says such secret funding should be illegal

According to Müller, this is just an excuse - and indeed the "manifesto" on the association's website sounds like an AfD campaign statement - anger at the cost of refugees to the social welfare system, criticism of the European Union, and criticism of the teaching of "sexual diversity" in schools. "It's very clear they're only doing adverts for the AfD," said Müller.

The association is fairly unique in Germany. Though there were similar campaign-financing clubs in the 1980s, which supported individual parties, a series of donations scandals in the 1990s led Germany's major parties to become more cautious. "I hope we won't see more examples like this in the future," commented Müller.

But nothing the association does is illegal. Some members of the AfD - whose branches in Schleswig-Holstein, North Rhine-Westphalia, and at a national level did not respond to a request for comment for this article - have expressed concerns about the lack of transparency. Its treasurer in Schleswig-Holstein, Bernhard Noack, told LobbyControl that he personally did find it "sensitive." "The AfD can't just silently tolerate it and be glad for the support - they should distance themselves," said Müller.

"We need a regulation that makes sure organizations that advertise for one party also have transparent financing," said Müller. "They have a rule like that in Britain, so I do wonder why we don't do that. Voters simply have a right to know who is financing the campaign of a party."