Alexander Gauland's speech on German history and the Nazi era has made waves at the AfD youth wing's party conference. While sparking national debate, Gauland's remarks also divided opinion on the event sidelines. 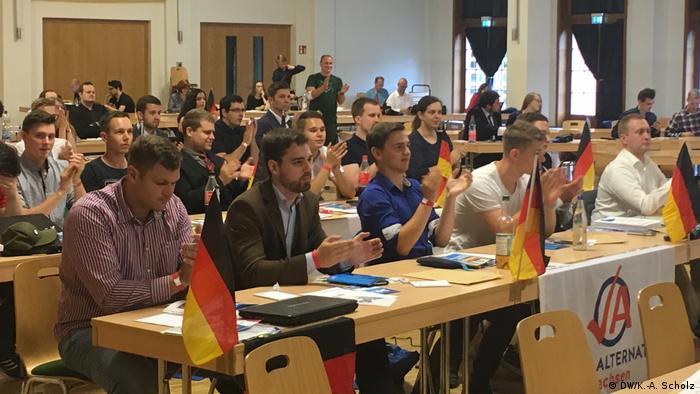 Alexander Gauland, the co-leader of the far-right Alternative for Germany (AfD) party, was the surprise guest at this weekend's congress of the party's youth wing in Thuringia, known as the Young Alternative (JA).

In January 2017, Thuringia's AfD leader Björn Höcke also triggered a political earthquake at a get-together of young party members. Höcke — widely viewed as part of the party's extreme right wing — had called for a "180-degree reversal" to Germany's politics of Holocaust remembrance.

Höcke returned to the stage this year but refrained from explicitly addressing the topic of German history. Instead, Gauland would take over that function.

In his speech, Gauland spoke at length about the necessity of a German identity. "We have a glorious history — and that, dear friends, lasted longer than those damn 12 years," he said, referring to the Nazi era.

"Yes, we accept our responsibility for those 12 years ...," Gauland continued, but "Hitler and the Nazis are just bird shit in more than 1,000 years of successful German history."

The work of Jewish citizens such as the academic Ernst Kantorowicz, the AfD co-leader said, was also part of Germany's glorious history of ideas "which Hitler, thank God, could not destroy."

Gauland closed his speech by insisting that AfD followers did not have to be convinced of National Socialism's worthlessness.

On the sidelines of Saturday's event, Gauland's remarks drew conflicting reactions among members of the Young Alternative.

His remarks were simply too ambiguous, said some, while others said Gauland had consciously demanded a stronger dissociation of the party from references to the Nazi era.

"'Bird shit' is not a word I would have used in this context," JA vice chairman Nicolai Boudaghi told DW. He said he did not believe Gauland had intentionally sought to stoke controversy with his speech, but had simply stumbled with his choice of words.

Boudaghi also stressed that he agreed with Gauland's assertion that Germany is a great cultural nation of which one can be proud, despite the 12 years of the Nazi rule.

The AfD's youth wing currently boasts around 1,800 members and associations in all 16 federal states.