Chancellor Angela Merkel has the backing of nearly 60 percent of voters to form a ruling coalition with the Greens and FDP, a new survey says. However, Germany may have to wait until the new year for a new government. 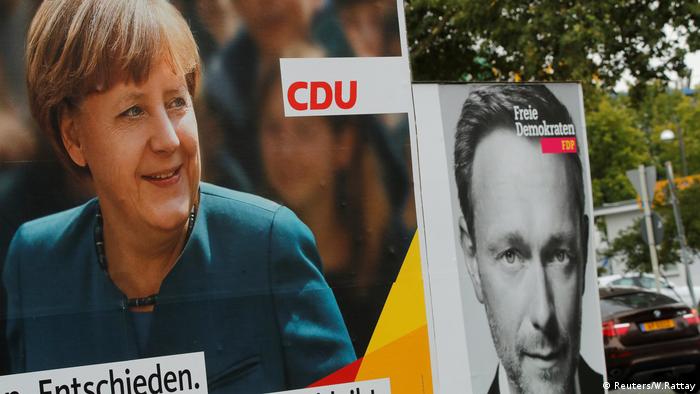 Fortunately for Chancellor Angela Merkel, the most likely option when it comes to forming a governing coalition for the new Bundestag — the "Jamaica coalition" — would have the public's blessing.

A poll commissioned by the German broadcaster ZDF found that 59 percent of voters favored a three-way coalition of Merkel's conservative Union bloc, the Greens and the business-friendly Free Democratic Party (FDP). The term "Jamaica coalition" comes from the three parties' colors — respectively, black, green and yellow — which corresponds with those of the Caribbean nation's flag.

Though coalition negotiations are expected to last for several months and new obstacles continue to surface, just under 80 percent of those surveyed said they believed that such a coalition would eventually come to fruition.

Meanwhile less than a quarter of voters said they would prefer to see a continuation of the grand coalition made up of Merkel's conservative Union and the Social Democrats (SPD).

For the survey, researchers questioned 1,425 German voters, chosen at random, between Tuesday and Thursday — two to four days after the election.

Coalition talks to go into 2018

On Friday, Angela Merkel's chief of staff, Peter Altmaier, said coalition negotiations could carry on into 2018. In an interview with German weekly Focus, Altmaier said he hoped that coalition terms could be agreed on by Christmas, but stressed that "the substance and not the timing was most significant."

Altmaier also advised the parties against prematurely discussing their conditions for going into government and drawing red lines.

Read more: Opinion: Sunny days are over for Angela Merkel

Talks are not scheduled to start until after the state elections in Lower Saxony on October 15.

Merkel's conservative Christian Democrats and the allied Bavarian Christian Social Union also want to clarify the future of their parliamentary party after they lost almost 1 million voters to the far-right AfD.

A three-way pairing with the FDP and Greens became Merkel's only coalition option after the SPD, the outgoing junior partner in the chancellor's current government, said it would go into the opposition after it suffered a historically low election result of 20.5 percent.

Read more: Who is Andrea Nahles, the new SPD leader in parliament?

The prospect of an SPD-led opposition was greeted by 62 percent of German voters, according to the ZDF poll.

However, SPD parliamentary chairman Thomas Oppermann said in a televised interview Thursday evening that the party may have to reconsider its decision in the rare event that Angela Merkel resigned or coalition talks between the Union, Greens and FDP completely broke down.

Reports from news agency Reuters on Friday suggested that Schulz had considered resigning as SPD leader following his crushing election defeat, before vowing to fight on and revamp the party.

"The next four years will be about nothing less than the very existence of German, even European social democracy," Schulz wrote in a letter to party members.

He also took a swipe at his predecessor, German Foreign Minister Sigmar Gabriel, for only stepping down and nominating him as the SPD's election candidate just eight months ahead of the vote.

The SPD's Sigmar Gabriel has said he will not stand for chancellor in September's German elections. This clears the way for a new candidate to challenge Chancellor Angela Merkel. (24.01.2017)