Opinion: Sunny days are over for Angela Merkel | Germany| News and in-depth reporting from Berlin and beyond | DW | 25.09.2017

Opinion: Sunny days are over for Angela Merkel

The outcome of the Bundestag election won't make federal policy any easier, and not just because of the AfD. Forming a government will probably be a lengthy task, says DW's Christoph Strack. 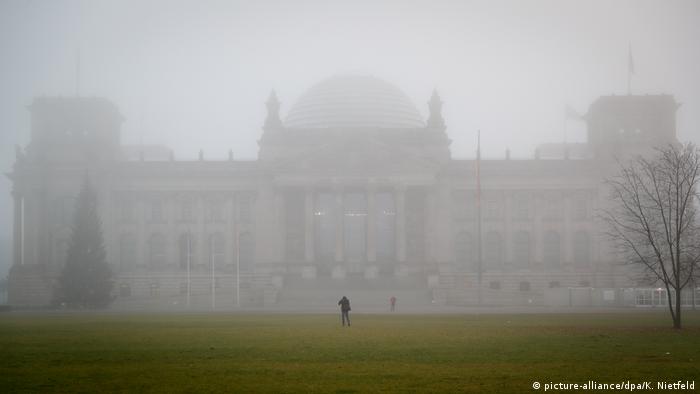 Sunday's federal election proved quite a storm for Chancellor Angela Merkel's government. Now, a day after these remarkable results, the skies over Berlin's River Spree are cloudy, drizzly, and unpleasant. The sunny days are over.

A snapshot of what politics will look like in the coming months? The new Bundestag, whose factions are being formed on Monday and Tuesday, will be larger than ever, with 709 deputies from seven parties. And, as a result of the arrival of the right-wing populist Alternative for Germany (AfD) and the return of the pro-business liberal Free Democrats (FDP), an unusually large number of parliamentarians are entering the political stage for the first time. This may become confusing, perhaps even unpleasant.

This confusion may occur not only because of the AfD's first appearance. Their group had not even been formed when, early on Monday, the most prominent and successful face of the party, its co-chair Frauke Petry, distanced herself and complained that moderate members were being "discredited at all levels." A good hour later, it emerged that four AfD representatives in the state parliament Mecklenburg-Western Pomerania were splitting off. What is on display here is the reality that populism is not yet a political program. The AfD runs the risk of sliding even further right. But their voters will demand a degree of consistency from the party.

Whatever judgments one might reach regarding Martin Schulz's fiery appearances since the election, it is remarkable that his Social Democrats (SPD) reported 975 new party members signing up overnight. The Greens also reported 268 new entries. Other parties will certainly soon comment on similar matters.

Political participation does not end in the voting booth. During the era of Germany's greatest post-war political controversies, up until the late 1970s, Germany would regularly log far higher voter turnout than Sunday's 76.2 percent — an improvement on 2013 and 2009, but still very low by Germany's standards.

In addition, in those times, the large parties had far better membership numbers and were "people's parties" in more than name. More citizens must again be brought in; the parties must manage to integrate more people. Too often, it's only old cliques involved. Politics is a competition or dispute seeking the best concepts; but it is also a common struggle. With everyone.

Forming a government not easily done

On election night, enough enthusiastic spirits from the youth wing of the Christian Democrats were roped in to ensure that a sobering election result was celebrated as a party victory. And Joachim Herrmann, the top candidate of its Bavarian sister party the CSU, cheered the fact that the CDU/CSU had prevented a possible "red-red-green" coalition of the SPD, the Left, and the Greens. As if that had even been seriously discussed in the past months...

In reality, Hermann himself is symbolic of the weakening of the CSU: due to the CSU's dip in support, there's no free seat left to assign him. So Herrmann (who didn't directly compete for a constituency spot) now needs a ministry in order to retain a meaningful political job, and that will be in Berlin.

This makes forming a government challenging. Someone has to rule. Talking confidentially, building trust, negotiating compromises, assuming responsibility. Late Sunday at party headquarters, Angela Merkel said "there would be no very simple weeks now," but that they'd be coped with out of "responsibility for the country" and the party program.

The chancellor is weakened

Time remains a factor. In 2005, when the first grand coalition under Merkel had to be created, government formation took 65 days. The second grand coalition in 2013 took 86. Business leaders queued up on Monday to demand that a government be set up quickly. Those calls were aimed above all at the chancellor (who is liable to carry the burden if her three allies can't agree).

But Merkel herself is weakened, however much she mustered all her political experience to radiate calm in the storm of results. A close look at the election results show that the Union has lost those who feel socially dependent, fear for their future, and maybe also thereby become so aggressive on the issue of refugees. Politically, Merkel has already reinvented herself several times during her twelve years as chancellor. Party politics are now making that more difficult. Her sunny days are over.

The current election result is a turning point for Germany. The far-right populist AfD has entered parliament for the first time, and Chancellor Angela Merkel has taken a hit, says DW Editor-in-Chief Ines Pohl. (24.09.2017)

The friendly faces of the AfD? Germany's new parliamentary representatives.

After the 2017 election, the far-right populist party will enter the Bundestag for the first time, picking up 94 seats. But who exactly are some of the Alternative for Germany's representatives — and what have they said? (25.09.2017)