Both President Steinmeier and King Abdullah II stopped short of declaring for one side in the controversy over Jerusalem's status. Steinmeier thanked Jordan for accepting hundreds of thousands of refugees from Syria. 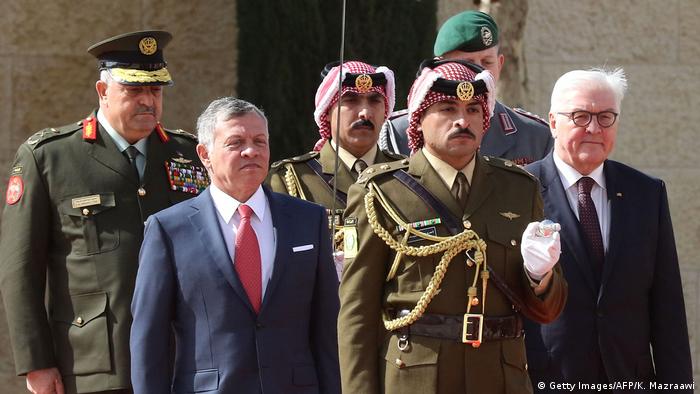 There are more than 600,000 refugees living in Jordan, which has a population of about 10 million. Steinmeier is due to visit a camp for Syrian asylum seekers on Monday.

During their talks, Steinmeier and Abdullah II discussed the controversial move by US President Donald Trump to recognize Jerusalem as the capital of Israel.

"I think there are very good reasons to question the theory that unilateral recognition of Jerusalem as the capital of Israel would contribute to the consolidation of peace in the Middle East," the president was quoted by the Jordanian daily Al-Ghad as saying.

"I think our views on Palestine and Jerusalem are well known to you," the king told Steinmeier. "We do believe in a two-state solution, with [east] Jerusalem as a capital for the Palestinians."

Jordan walks the line between Palestine and US

Jordan is home to a great number of Palestinians displaced by their conflict with Israel, though it remains an ally of the US and is dependent on Washington for economic and military aid.

Steinmeier also paid a visit to the 300 German soldiers stationed at al-Azraq military base in eastern Jordan. The Bundeswehr has had several fighter jets stationed there for the fight against "Islamic State" (IS) since diplomatic tensions forced a move from Incirlik in Turkey.

Following his visit to a Jordanian refugee camp that houses some 30,000 people who have fled the conflict in Syria, Steinmeier will travel to Lebanon — the first German head of state to do so in over a century.

Ursula von der Leyen had to scrap her last visit due to political deadlock in Berlin. Germany is reportedly preparing to roll back its role in the fight against "Islamic State." (13.01.2018)