The German president has arrived in Amman ahead of a Middle East tour set to focus on refugees and regional conflict. Berlin recently delivered millions in military equipment to Jordan despite a pledge to the contrary. 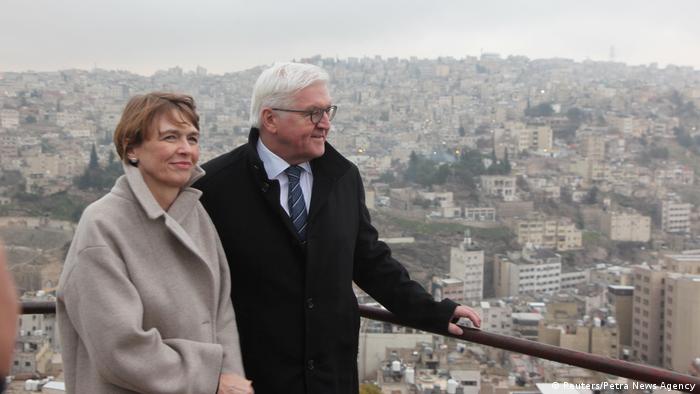 Germany's President Frank-Walter Steinmeier arrived in Jordan on Saturday for a four-day trip across the Middle East. Steinmeier is set to meet with Jordan's top politicians, as well as leaders in Lebanon and with German troops based in the area.

Along with his wife, Elke Buedenbender, Steinmeier will also visit a refugee camp. Major points of dialogue will be the waves of refugees created by wider conflicts in the Middle East as well as Islamist extremism.

Steinmeier's visit to Lebanon is especially important as it is the first visit by a German head of state in 120 years — although Steinmeier visited the country six times during his tenure as foreign minister.

On Sunday, the president will meet with Jordan's King Abdullah and Queen Rania. Ties between the two nations have been strained recently as Germany takes a stronger stance against the proxy war in Yemen, in which Jordan has tacitly supported the government of ousted President Abed Rabbo Mansour Hadi.

Although the German government has promised to stop sending weapons to countries involved in the Yemen conflict, a €130 million ($160 million) "armaments subsidy" has been made available to the Jordanian government. Defense Minister Ursula von der Leyen also delivered military equipment to Jordan when she visited troops earlier in January.

Steinmeier will then visit about 300 German soldiers stationed at the al-Azraq airbase, which Germany has been using since tensions with Ankara forced a move from Incirlik in Turkey.

In Lebanon, the president will meet with President Michel Aoun and Prime Minister Saad Hariri for the first time since a political crisis late last year prompted Hariri to resign, and then rescind his resignation weeks later.

Saudi Arabia spends hundreds of millions of euros on military equipment from Germany each year. More than 5,000 civilians have died in the proxy war between Riyadh and Tehran. (19.01.2018)

Germany's current government has approved massive arms exports to countries in conflict areas, according to a new report. The CDU-SPD cabinet also set new records for selling weapons, despite pledges to reduce it. (24.01.2018)