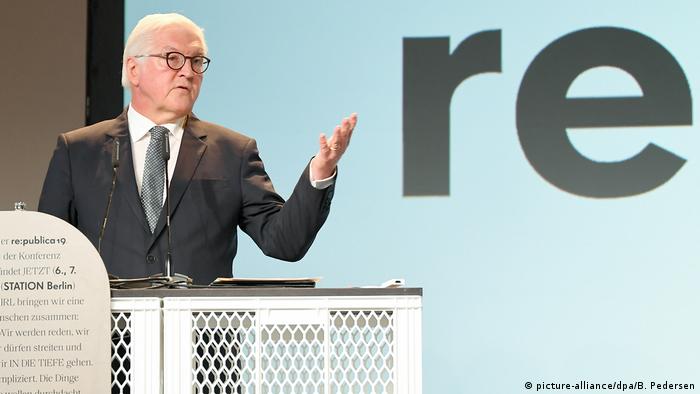 Steinmeier called for a more civilized culture of debate on the internet, wondering why political debates "so often tend to be toxic."

"If the future of democracy is close to our hearts, then we need to pay attention to the political debate culture on the internet," the German president said. "After many words and announcements, after rounds of talks and political photo opportunities, it is time for Facebook, Twitter, YouTube and Co to finally take more responsibility for democracy."

Steinmeier called for "democratic regulations" and concrete measures, as well as "crystal clear seals of origin for information, especially when it comes to political advertising."

But the most urgent task, he said, was not the "digitalization of democracy, but the democratization of digital space."

The two-day convention in the German capital is showcasing more than 400 lectures and discussions, which touch on the future of media, new platforms and the handling of populist content.

More than 20,000 people from 82 countries took part in last year's convention, which organizers called the largest digitalization and society in Europe.

At the start of this year, Germany implemented a new "network enforcement law" (NetzDG) designed to crack down on hate speech and illegal content on the internet. Under new rules, any internet platform with more than 2 million users had to delete flagged content within 24 hours of a complaint, or face a fine of up to €50 million ($56 million).

Germany has also scrutinized Facebook — as well as other Apple and Alphabet, Google's parent company — regarding their handling of personal data. In February, the Federal Cartel Office, Germany's antitrust watchdog, imposedrestrictions on the amount of personal data the social media giant can collect. Later that month, a Berlin-based court found Facebook's use of personal data to be illegal.

In recent months, Facebook has made a concerted effort to remove extremist individuals, groups and content from its platform. Last week, Facebook announced it had banned multiple extremist figures, including far-right personalities Alex Jones and Milo Yiannopoulos, after banning several British far-right groups in April. It also instituted a ban on white nationalist content in March.

The social media giant has stepped up efforts at combating disinformation on its platform that could manipulate the outcome of the European Parliament elections. But is it doing enough? (05.05.2019)