German President Frank-Walter Steinmeier has described scenes of desperate civilians at Kabul airport as "shameful" for the West. He said Germany shared responsibility for what had transpired. 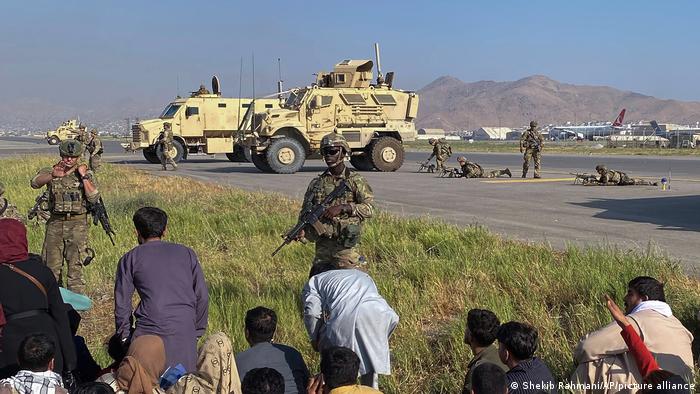 US soldiers stand guard inside the international airport in Kabul

Germany's president on Tuesday said the images from Kabul airport, with civilians clamoring to escape the Taliban takeover, were a source of shame for Germany and its NATO allies.

President Frank-Walter Steinmeier, whose role as head of state is largely ceremonial, said Germany owed a debt to those now at risk from the hard-line fundamentalists' return to power.

"The images of desperation at Kabul airport are shameful for the political West," Steinmeier said.

"We are experiencing a human tragedy for which we share responsibility," Steinmeier said.

Berlin should "do everything it can to bring our people, and all Afghans who stood for years by their side, to safety," said Steinmeier, who previously served as foreign minister.

Germany, he said, must help those in Afghanistan who are at risk, including "many courageous women."

"The failure of the yearslong efforts to build a stable and viable society in Afghanistan raises fundamental questions for the past and future of our foreign policy and military engagement," he said.

For nearly two decades, Germany deployed its forces to Afghanistan as part of the US-led NATO operation there.

The 150,000 men and women sent by Germany over the period made it the second biggest contributor of NATO troops, after the United States.