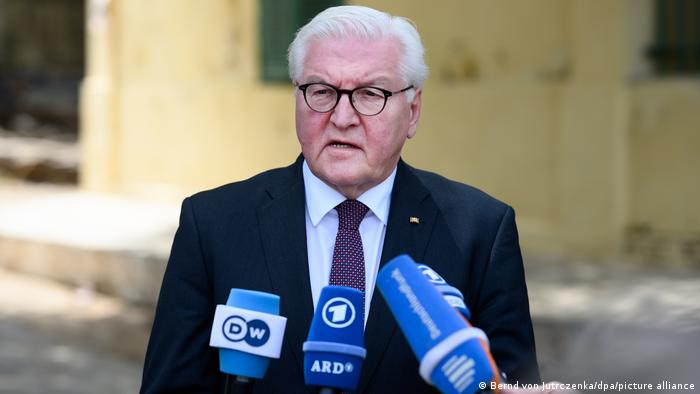 Melnyk told Tagesspiegel newspaper that Steinmeier has not been serious about his break with Russian policy. He added that people connected to Steinmeier like Jens Plötner, foreign policy advisor to Chancellor Olaf Scholz, and State Secretary in the Ministry of Foreign Affairs Andreas Michaelis as well as many important ambassadors also share Steinmeier's closeness to Russia.

Kaczynski took aim as well at Germany's foreign policy in Welt am Sonntag, where he noted his country "is not pleased with Germany's role in Europe." Instead, he called for a 50% increase in US troops in Europe to contend with the continent's emerging security conflagrations.

The remarks come as the German government has sought to reverse course on its own policy with respect to Russia, in the wake of the invasion of Ukraine.

What did Ukraine's ambassador to Berlin say?

Melnyk said Steinmeier built a "web of contacts with Russia for decades." He added, "For Steinmeier, the relationship with Russia was and remains something fundamental – even sacred."

"No matter what happens, even the [Russian invasion doesn't play a big role," Melnyk said.

He added, "From Putin's point of view, there is no Ukrainian people, no language, no culture, and therefore no state. Steinmeier seems to share the idea that Ukrainians are actually not a subject."

The Ukrainian envoy to Berlin previously openly criticized Steinmeier by refusing an invite to a peace concert he had organized with Russian musicians.

"From my point of view, the concert was a clear signal in the direction of Moscow, maybe even to show Putin: I'm holding the fort here," Melnyk said.

Steinmeier on Ukraine: 'I hope that there's willingness to talk'

Melnyk noted the German government has not been forthcoming about sharing its plans for potential weapons deliveries. The ambassador noted that he read the news that Germany plans to supply Ukraine with €308 million in weapons in the papers along with everyone else.

"The communication could be a lot better," Melnyk observed.

Kaczynski said Europe needs more US troops "due to Russia's increasing aggressiveness," adding Germany has "a strong inclination towards Moscow."

He added Chancellor Olaf Scholz must also be willing to pay a high price for freedom.

Kaczynski noted his country is open to the deployment of US nuclear weapons on its territory, though a conversation with Washington on the matter has not yet occurred.