The German head of state is in India at a time of religious tension. He aims to promote mutual understanding, and is visiting sites that are holy to Hindus, Buddhists and Muslims. Katharina Kroll reports from New Delhi. 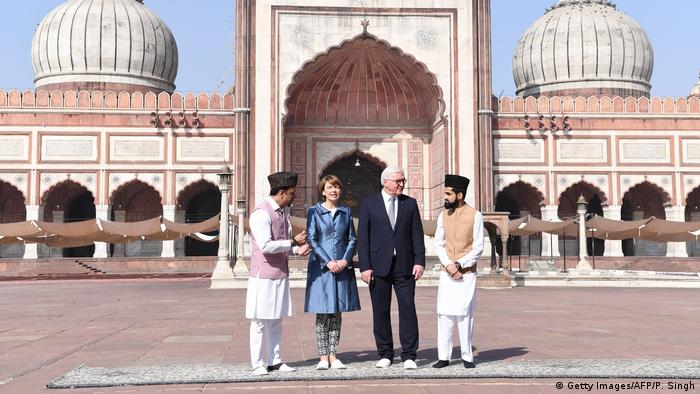 Incense hangs heavy in the air, and warm orange light from oil lamps and candles illuminates the darkness of the riverbank. Nine priests sway along, enraptured, to the rhythm of the singing. This is the Ganga Aarti ceremony, in which people pray to the mother of all Hindus: the sacred river Ganges, the great artery that flows right across India. The German president, Frank-Walter Steinmeier, sits among the dignitaries on the VIP podium.

The first stop of Steinmeier's visit is Varanasi, one of the oldest cities in the world and the holiest Hindu city. Nowhere is the Ganges more sacred than here. The walls of the houses all over the city are plastered with huge posters depicting the visitor from Germany alongside the Indian prime minister, Narendra Modi: "Welcome Frank-Walter Steinmeier in Varanasi. The Cultural Capital of India." The newspaper carries an appeal to the local population from the municipal authorities to remove stray animals from the streets.

Appeal for a diverse India

The stops on Steinmeier's trip have been very deliberately chosen. The German president is advocating religious diversity and tolerance — for centuries, India's distinguishing characteristics. His message is also directed at the people of Germany, where a fresh debate has flared up about Islam. "We can learn from India," Steinmeier says.

In Varanasi, Steinmeier also talks to students from the Banaras Hindu University. "We don't just live our diversity in India, we celebrate it": That's the message of these 25 students to the German president. Of course, the religious differences between them are obvious, they say; but they're irrelevant in terms of their friendships and their communal life at the university.

The German president is clearly impressed by his discussion with these young Indians. "The students are all keen to keep India's very diverse society together, and are prepared to do something to ensure this," he says after their meeting. The president was inspired by the students' message of diversity

The rise of intolerance

However, many Indian Muslims are having a very different experience at present. Steinmeier has come at a time of rising religious tension in India. There are 180 million Indian Muslims, but they still constitute a minority in the country with the world's second-largest population. More and more often in recent years, Muslims have been attacked by far-right Hindu groups — and these groups are closely allied with the religious-conservative BJP party of Prime Minister Narendra Modi.

The BJP primarily champions the interests of Hindus, and many of its followers dream of turning secular, multi-religious India into a Hindu state. Thus, for example, a row has broken out about a proposal for a nationwide ban on the slaughter of cows. Cows are sacred to Hindus, but for Muslims and Christians they are merely livestock. The battle for the holy cow has already led to several Muslims being murdered. 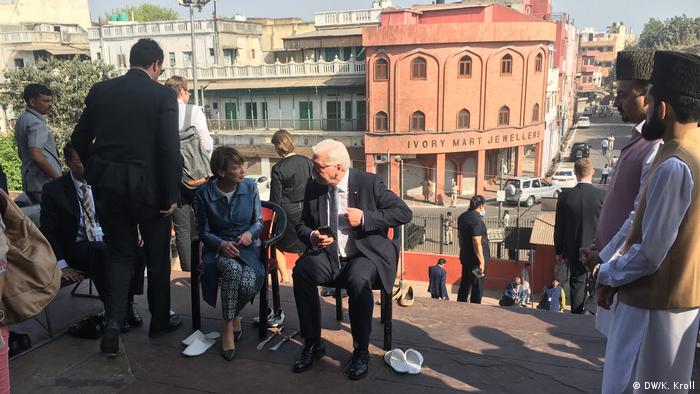 Even the president must remove his shoes to enter the mosque

"I think that, right now, it's very hard to be a Muslim in this country,” says Karuna Nundy. She's a lawyer in India's Supreme Court, and a well-known women's rights activist. India, she says, is facing an important decision: "Do we want to be a country with a single state religion that only a certain group identifies with? Or do we want to be a country in which people have the same rights, freedom of religion, freedom of speech, and also freedom with regard to what they eat, how they pray and what they wear?"

According to the Indologist Axel Michaels, a professor at Heidelberg University's South Asia Institute, influential groups within Modi's Hindu nationalist party have been trying to make Hinduism the dominant religion, one that would suppress all the country's diversity. "And, often, Prime Minister Modi lets them do it," Michaels comments.

Meanwhile, the German president is also setting an example in other ways. Shoes off, white slippers on — the President and his wife Elke Büdenbender follow religious protocol before stepping through the great gate into India's biggest mosque: the Jama Masjid in the capital, New Delhi.

Their visit is a positive sign, says Tariq Bukhari of the Jama Masjid's advisory council. "Especially for the Indian Muslim community."

With a population of 1.3 billion, India is a pluralist, secular state. Its constitution is based on tolerance and diversity. But the country is divided and at odds with itself in a variety of ways. Extreme poverty exists alongside extreme wealth. India is funding a gigantic mission to Mars, and at the same time half its population are without toilets.

Prime Minister Modi's goal is to stimulate the Indian economy. Every month a million young people come onto the job market. They urgently need work.

India is eschewing isolation and pinning its hopes on international cooperation, which makes it an important partner for Germany. "Both our countries are aware that, in an increasingly multipolar world, no country can overcome global and regional challenges on its own," says Steinmeier, before he and his wife lay a wreath at the cremation site of Mahatma Gandhi, the father of the nation.

Gandhi campaigned for the peaceful coexistence of religions. He was a deeply religious Hindu who incorporated verses from the Koran and Buddhist chants in his prayers. Today, 70 years after he was murdered by a Hindu nationalist, his message is still relevant and topical — for both India and Germany.

Ahead of elections in Gujarat, Indian PM Narendra Modi's home state, attacks against "lower-caste" Dalits have increased. Could the outrage of Dalits hurt the ruling BJP party in the polls? Murali Krishnan reports. (05.10.2017)

Delivering the opening keynote address at the World Economic Forum in Davos, Switzerland, Indian Prime Minister Narendra Modi has shared his vision for his country's engagement with the international community. (23.01.2018)