World Toilet Day: A private matter of public health | World | Breaking news and perspectives from around the globe | DW | 19.11.2018

World Toilet Day is no joke. No invention has saved more lives than the loo. But 4.5 billion people have to make do without functioning sanitation systems every day. 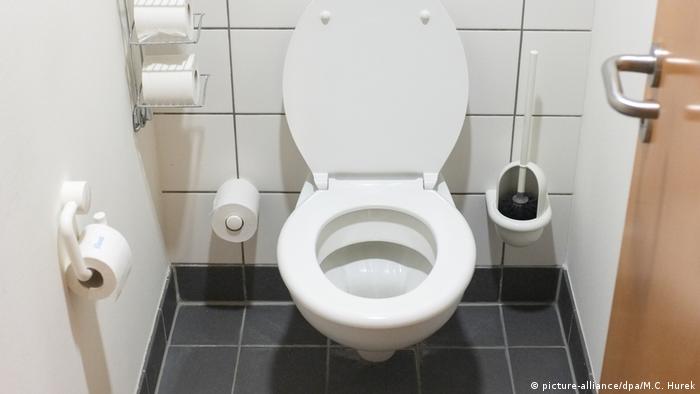 It is dawn. The first rays of sunlight break over the horizon; in the haze one can see the silhouette of a small rural village. A newlywed couple is asleep in bed when there is a knock at the door. Outside, two women with lanterns wait. They are here for the bride — to take her out for a morning trip to the toilet. That means to the bushes at the edge of the village. The bride is shocked and runs away from her husband in horror.

The scene is from the 2017 Bollywood film "Toilet: A Love Story," the true account of a man whose wife left him because he was missing a piece of plumbing, and his fight to build a sanitation system for his village.

India has declared war on life without toilets. Not only have films done so: Politicians have, too. No country has more people without latrines, leaving many residents of the world's second most populous nation to do their business in public.

"Toilets are more important than temples, Indian Prime Minister Narendra Modi announced recently," said Arne Panesar, who heads the department for sustainable sanitary provisions at the German Corporation for International Cooperation (GIZ). "His plan is for all Indians to have secure, sustainable toilets by the year 2019." Panesar has often visited the country and neighboring Bangladesh for projects.

He said it was a positive development that politicians have expressed an interest in taking on the issue. But, he added, it is also important to look at how they are actually going about it: "The mayor of Dhaka, the capital of Bangladesh, for instance, said that now only 1 percent of the city's 16 million inhabitants are without toilets." But if you look at where the waste goes, things are not as rosy as the mayor paints them. Of those 16 million people, only 1 or 2 percent have securely managed sanitary provisions. That means that waste ends up in containers where it cannot be treated. The other 98 percent simply flows out of the system. Thus, human waste is simply spilled out into the street in some neighborhoods, or into streams in others. That, of course, does not aid the health of the population.

Almost 1,000 children die preventable deaths each day. Many parasites and diseases such as cholera, typhus and polio are able to spread unimpeded because of a lack of secure sanitation systems. Beyond India, a number of African countries also have problems providing citizens with sanitation systems.

Sunday is World Toilet Day. In its 2015 Sustainable Development Goals, the World Health Organization set a target of providing all people with clean drinking water and functioning sanitary systems by the year 2030. In the paper, the WHO emphasizes the importance of providing for the needs of the poor — especially women and girls, for whom toilets are about more than hygiene and health: They are also about safety and education.

"It is especially important for young women to have a space that they can go to when they are menstruating. That is why we have so many projects in schools," said Stefan Simon, of Germany's Welthungerhilfe (World Hunger Aid). "If there are no clean, separate toilets in a school, girls simply do not go to school when they are having their period. Therefore they miss class, and that leads to a loss of education and ultimately has a negative impact on a country's economic power."

The goal is not to have every country install European-style sewer systems. "That is neither financially nor structurally feasible," Panesar said. "We would not be able to duplicate our German system overnight either. Furthermore, there are a number of regions that simply lack the water for such systems. The most important thing is that waste does not escape into the environment, and that people have a safe, indeed, a dignified toilet.” He pointed out that until 2015 the campaign was more about getting people to use toilets at all rather than defecating in the open, which had unintended consequences. "Toilets were built, but most dumped straight into the village pond,” Panesar said. "Of course, that isn't the point of building a toilet. So when the new sustainability goals were introduced, the numbers plummeted because many of the toilets that had been built were no longer considered safe.”

Composting toilets are one possible solution. They collect ands decompose waste without releasing it into the environment. Cesspools can also work if they are located far enough away from wells or other water sources.

It's unclear whether the sanitation goals can be met by 2030. In order for the situation to fundamentally improve, not only will toilets have to be built, but people will also have to be educated about how to use them and the cultural issues surrounding them will need to be resolved.

"Take Ethiopia for instance. Families there often welcome the fact that they are to receive a toilet. But it doesn't take long before bathrooms are being used for things other than their designated purpose. Instead they are used as closets or food pantries," Simon said. "We would gain a lot if we could teach people that they have to keep human waste and food separate. But rational arguments are of little help to that end. It is much more effective to use emotional arguments. Because people that have clean water and clean toilets feel better, and they do not have to be embarrassed when shaking a neighbor's hand."

And that is exactly the strategy being used in India, where a toilet can tell a love story. It is about lifting taboos, emotionalizing a subject and addressing religious reservations.

A massive fire at a commercial building in India's capital has killed at least 27 people and injured many others. Officials said the building was not equipped with fire safety equipment.

As India celebrates Republic Day on January 26, we showcase ten films, documentaries and series that take a critical look at the state of the nation.

Heavy rains have triggered flooding and landslides that swept through towns in the Indian state of Kerala. The National Disaster Response Force and the Indian army have been deployed to assist with rescue efforts.