India′s Dalits outraged at increase in caste-motivated attacks | Asia | An in-depth look at news from across the continent | DW | 05.10.2017

Ahead of elections in Gujarat, Indian PM Narendra Modi's home state, attacks against "lower-caste" Dalits have increased. Could the outrage of Dalits hurt the ruling BJP party in the polls? Murali Krishnan reports. 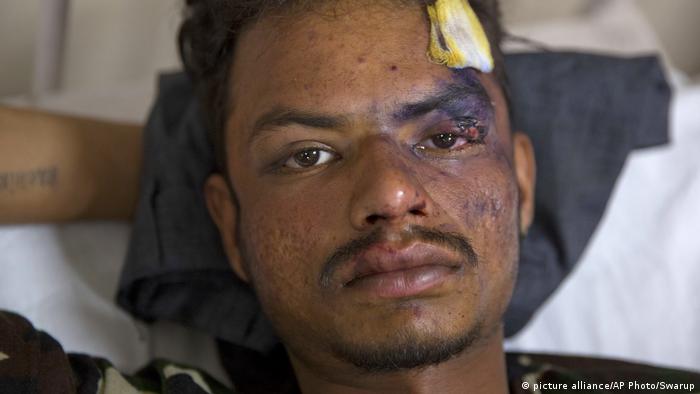 After a series of recent attacks against Dalits in India's western state of Gujarat, the Dalit community is outraged and seeking answers from authorities in addressing the violence.

Dalits are at the bottom of the Indian caste system of social hierarchy, making them vulnerable to discrimination and attacks by "upper-caste" Hindus.

Earlier this week, a 17-year-old Dalit youth was walking back from school in Gandhinagar when two unidentified men drove up on a motorcycle and slashed his back with a blade.

In a more heinous case, a Dalit youth was lynched by the upper-caste Patel community last week in the city of Ahmadabad for watching people do garba, the traditional Gujarati dance performed during the Hindu festival of Dussehra. The police arrested eight people and registered a case of murder.

Prior to this incident, two other youth were attacked by "upper-caste" Rajputs for the "crime" of growing moustaches. 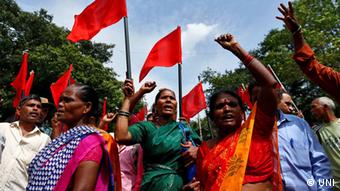 A protest for Dalit rights in Mumbai, August 2017

This trend of caste-based violence that is erupting now mostly involves attacks on Dalits. Upper-caste communities treat Dalits as pariahs both because of their occupations - such as leatherwork and menial jobs - and their birth.

"Life has become difficult for Dalits. Home Minister Pradipsinh Jadeja should resign, before Dalit anger tears Gujarat apart," Jignesh Mevani, a 36-year-old lawyer and activist, who has been at the forefront of the Dalit movement, told DW.

Dalit outrage has added significance given that Gujarat is preparing for crucial assembly elections next month and the ruling  Bharatiya Janata Party (BJP) is pulling out all the stops to contain Dalit outrage.

The Gujarat election is one of the most important tests for the BJP before the general elections in 2019.

"What we are seeing in Gujarat is the consolidation of Dalits. Their anger will have a spillover effect and will harm the BJP's prospects," Paul Divakar, general secretary of the National Campaign for Dalit Human Rights, told DW.

Concerned by the growing outrage, the BJP-backed Bharatiya Bauddha Sangh (BBS) is initiating a counter movement to bridge the gap that has emerged between Dalit and upper-caste communities.

"Our attempt is to bridge the gap that has appeared between Dalits and other communities. We will carry the message that the BJP has installed a Dalit in Rashtrapati Bhawan (presidential palace) and that the party's government is working for the welfare of Dalit people," said BBS head Bhante Sanghapriya Rahul.

In response to the "moustache attacks" against Dalits by Rajputs in Gujarat, several men on Indian social media have changed their profiles over the last few days, posting selfies on Twitter and Facebook and adopting display pictures of a twirled moustache with a crown and "Mr. Dalit" written on it.

Many others posted their pictures sporting twirled moustaches, with hashtags like #DalitWithMoustache and "Right to Moustache" on Facebook and Twitter that have evoked strong support and solidarity.

"I am getting more people from the Dalit community to post pictures of themselves with moustaches on Facebook. The number will keep increasing," Gautam Makwana, a student from Ahmedabad who posted his selfie with a moustache, told DW.

A cycle of adversity

Due to poor educational and employment opportunities, Dalits often have no choice but to resort to caste-based occupations such as manual scavenging and disposal of dead animals and people.

Regardless of constitutional freedoms and protection, Dalits in Gujarat suffer also from religious alienation where temples ostracize them in order to preserve the so-called piety of the faith's upper-caste elders.

And anger in the Dalit community still simmers over last year's flogging incident in Una, a town in the Gir Somnath district.

Four Hindu Dalit youths were flogged by so-called "cow vigilantes" in public, allegedly for cow slaughter. The video of their brutal thrashing went viral and triggered shock and horror across India. It also led to widespread protests across the country.

"One can never forget such an incident and the atrocities have only risen. That incident was the turning point and we will mobilize support and teach the BJP a hard lesson," said Dalit activist Mevani. 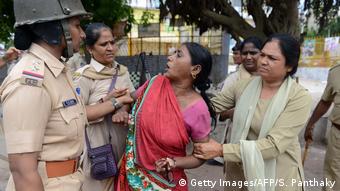 A Dalit woman being arrested during a protest in Una, Gujarat, July 2016

Dalits make up just 7 percent of Gujarat's 62 million people, and there are over 200 million Dalits in India - about one sixth of the country's total population. But social tension between the Dalit community and upper castes is rising acutely.

"Caste inequity and injustice is still thriving in the social fabric of Gujarat. We are subjected to the worst humiliation," Praveen Talapali, a research scholar who has organized several protests, told DW.

The government has tried to reverse discrimination by setting aside quotas in jobs and in universities for disadvantaged sections like the Dalits and other backward communities. They are also given fellowships but discrimination, many say, works discreetly.

It may still be too early to call the Gujarat election, but the BJP is leaving no stone unturned to rally its loyal vote bank behind it.

World Stories - Hope of Change? The plight of India's Dalits

A surge in attacks on Christians in India is part of a much broader malaise, experts say. "The objective is clear: to isolate and demonize minorities so that a Hindu state is established," a political scientist told DW.

As Punjab state goes to the polls this week, new political parties affiliated with farmers' unions want to continue the momentum of India's agrarian protest movement.