Germany saw a 2.1% increase in the population with a migrant background in 2019, though the rate of increase was the least rapid since 2011. The largest group hails from Turkey, around one in three are from the EU. 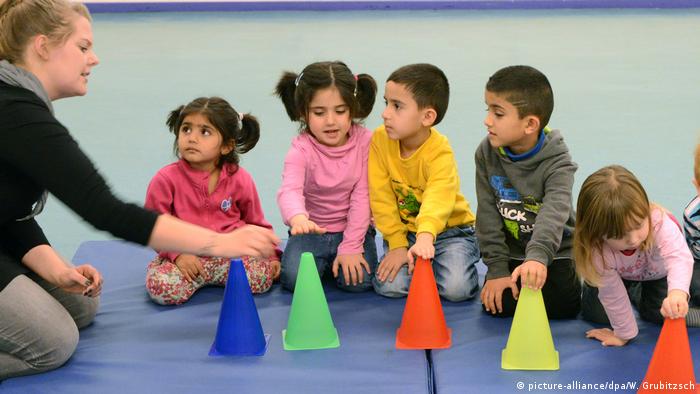 The share of people with a migrant background in Germany rose to 21.2 million last year, the Federal Statistical Office said in a report on Tuesday. They represent roughly 26% of Germany's population.

The figure represented a 2.1% increase from the previous year, but it was the slowest rise in people with a migration background since 2011.

In Germany, a person is considered to have a ''migration background'' (Migrationshintergrund) if they, or at least one of their parents, were born without German citizenship. Being born in Germany is not an automatic qualification for citizenship as in some countries, although in the majority of cases, eight years residence will suffice.

Of the 21.2 million people with a migrant background, just over half were born as German citizens, meaning at least one of their parents had become or was a German citizen.

Read more: Who is Germany's first mayor of a state capital with migrant roots?

The largest single group, forming some 13% of people with a migrant background, originated from Turkey. Those from Poland and Russia followed respectively.

Location varied significantly, with a higher share of people with migrant backgrounds clustered in the west. The northwestern city-state of Bremen has the highest figures, with 36.5% of its total population having a migrant background. In contrast, the eastern state of Thuringia had only 7.8%.

Petra Bendel, chairwoman of the Expert Council of German Foundations for Integration and Migration (SVR), said that Germany would continue to rely on migration for the foreseeable future, even in light of the coronavirus pandemic.

Bendel said migration was the key to solving the problem of "demographic shrinkage of the population." Despite rising slightly in recent years, Germany has consistently had one of the world's lowest birth rates since the end of the second World War.

But the study also showed that, as migrants settle in Germany, many lagged behind the German population on high-paying jobs and qualifications.

"People with a migration background are clearly over-represented in cleaning jobs, warehousing, food production and care for the elderly," the SVR chairwoman said. "In the future we will continue to need more skilled workers."

In large cities, up to 70% of inhabitants will have a migrant background in two decades, experts say. Germany will need to attract a "range of nationalities" to keep the "economy stable."

German is the most spoken language in immigrant households

Most people with immigrant backgrounds in Germany primarily speak German at home, according to microcensus data. The results come on the heels of a debate about holding kids back from school over their German skills.

Hailing from Syria, Afghanistan and Eastern Europe, they attend the same integration class in their new home. Despite different backgrounds, these high school students all have one thing in common: motivation to succeed.