Steve Bannon plans to build a right-wing populist think tank in Europe. German lawmakers called the plans by the former adviser to the US president to influence the 2019 European elections "a frontal attack on the EU." 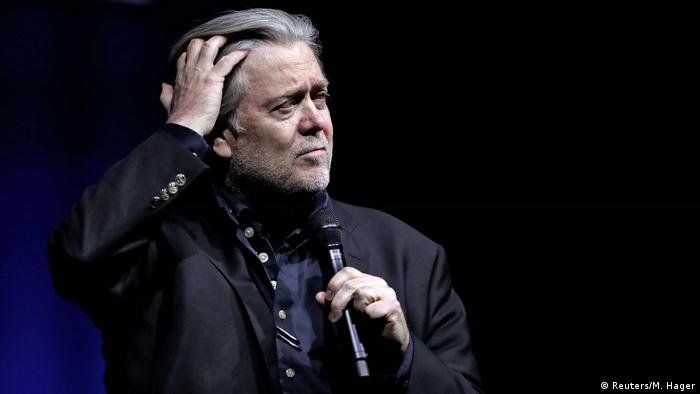 Plans by US far-right figure Steve Bannon to influence the European Parliament's 2019 election have been met with alarm across Germany's political spectrum. Bannon has become a controversial figure, known for his ties to the campaigns for the UK to leave the European Union and the election of US President Donald Trump.

"We have to fight now, with good arguments, confident and true," said Michael Roth, a center-left Social Democratic (SPD) lawmaker and minister of state for Europe in an interview with Die Welt newspaper.

Europe should not "be afraid of nationalist campaigns with which Mr. Bannon would like to force Europe to its knees…our values are stronger than his hate and his lies."

'A frontal attack on the EU'

In an interview with the same newspaper, Florian Hahn of the center-right Christian Social Union (CSU), the Bavarian sister party of Chancellor Angela Merkel's Christian Democrats (CDU), said he believed that the threat of Bannon's influence in European elections should be "taken seriously."

He added that the entire bloc should remain vigilant "against any inadmissible external electoral interference."

The pro-business Free Democrats (FDP) had even harsher words for Bannon, calling his plans for Europe "a frontal attack on the EU and European values."

The former investment banker plans to found a right-wing nationalist think tank, likely in Brussels, according to The Daily Beast, and create a conservative campaign called "The Movement" ahead of next year's elections.

Bannon has worked with many of Europe's far-right parties, including the Alternative for Germany (AfD), the only party in the country to express optimism over Bannon's project. Although the AfD has declined help from Bannon's foundation for its electoral campaigns, party co-chair Alice Weidel recently sought his advice when both were in Switzerland in March for a conference.