Donald Trump's ex-strategist, Steve Bannon, told the Daily Beast he hopes the foundation will fuel the spread of right-wing populism across Europe. He wants to offer a right-wing alternative to George Soros's foundation. 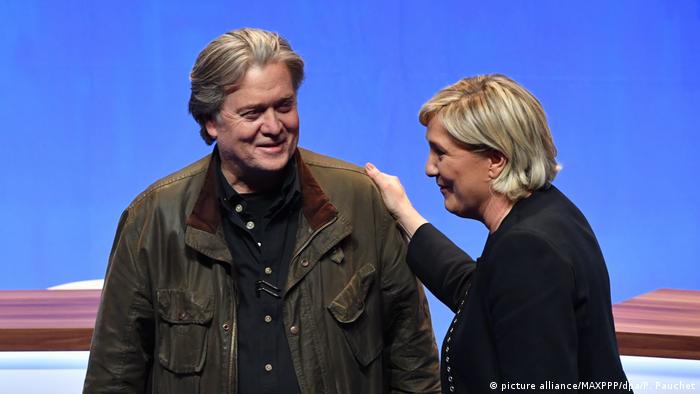 Right-wing ideologue Steve Bannon is preparing a European foundation which would advise and support populist forces across the continent, the US-based Daily Beast reported on Saturday.

The organization would be dubbed "The Movement" and be based in Brussels, according to Bannon. The Belgian capital also hosts the headquarters of NATO and the EU.

The Movement would research and write policy proposals, commission polling, and share expertise on messaging and data targeting.

Bannon laid out his plans to the Daily Beast, saying he wanted to boost populist parties enough to create a right-wing "supergroup" following EU Parliamentary elections next May. The populist bloc could gather up to a third of 705 deputies' seats (MEPs) to be decided in elections over the next year.

"Everybody agrees that next May is hugely important, that this is the real first continent-wide face-off between populism and the party of Davos," he said, referring to the yearly economic summit of heads of state and business in the Swiss mountain resort.

Bannon also said he first got the idea after being invited to speak at an event by French populist Marine Le Pen earlier this year.

The 64-year-old former banker claims European integration is coming to an end.

"Right-wing populist nationalism is what will happen. That's what will govern," he told the Daily Beast. "You're going to have individual nation states with their own identities, their own borders."

The Brussels-based organization is set to open in the coming months with 10 full-time employees. The number might grow to 25, depending on the May 2019 European parliamentary elections, Bannon said.

Eventually, Bannon hopes The Movement would come to rival the Open Foundation backed by Hungarian-born billionaire George Soros, which promotes tolerance and liberal policies across the world.

Bannon said he wanted to "win and then I want to effectuate change."

"I'm about winning. I'm about power," he told the Daily Beast.

Bannon first came to wield influence in the US policy by becoming editor-in-chief of the far-right Breitbart news outlet in 2012 and through his ties with the rich, conservative Mercer family.

The Mercers backed Donald Trump during the US presidential campaign and reportedly pressured him to hire Steve Bannon as his chief campaign executive.

After Trump's election victory, he named Bannon to a newly-created post of chief strategist.  However, Bannon was forced to resign last August after reported clashes with other senior White House staff.

Months later, Trump publically denounced Bannon, calling him "Sloppy Steve" and saying he had "lost his mind" over his statements on the meeting between Donald Trump Jr and a pro-Russian lawyer.

Bannon is believed to have lost the backing of the Mercers and he later stepped down from Breitbart.

In January 2018, he was subpoenaed by Robert Mueller as part of the investigation into alleged Russian interference.