Steve Bannon, once hailed as the mastermind behind Donald Trump, was forced to step down from his post at Breitbart. Bannon has run afoul not only of Trump, but also of his key backers from the wealthy Mercer family. 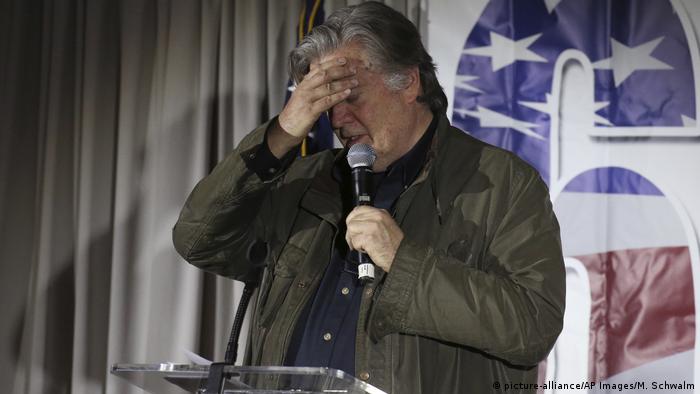 Steve Bannon's fall from grace apparently culminated on Tuesday, when he announced he would step down as head of the conservative outlet Breitbart.

Bannon's position has been deeply shaken by his feud with Donald Trump over the statements cited in the new "Fire and Fury" book. According to US media, the spat also created an open rift between the 64-year-old strategist and his powerful financiers, the conservative Mercer family, which had played a key part in Bannon's rise to power.

Who are the Mercers?

The Mercer family patriarch is the 71-year-old hedge fund magnate Robert Mercer, until recently a co-CEO of Renaissance Technologies trade firm. Mercer is a computer programmer by vocation who worked in computational linguistics for the computer giant IBM for two decades before joining the hedge fund company in the early 1990s.

Mercer is an avid poker player, a model train aficionado, and notably tight-lipped — he avoids speaking openly on his political beliefs.

"I believe that individuals are happiest and most fulfilled when they form their own opinions, assume responsibility for their own actions, and spend the fruits of their own labor as they see fit," he said in November.

According to an in-depth report by Jane Mayer in the New Yorker, Mercer is a Christian conservative, gun enthusiast, a climate change denier, religious, small-government proponent and a man who despises the political establishment as incompetent and corrupt. He has donated over $100 million (€84 million) to various right-wing candidates and think-tanks. Most of that money has gone through the Mercer Family Foundation, run by Robert Mercer's daughter Rebekah.

The 44-year-old Rebekah Mercer is the middle of Robert Mercer's three daughters. She is said to share her father's political convictions and cut an imposing figure even among ultra-rich US conservatives. On behalf of the Mercers, she backed Mitt Romney's presidential bid in 2012.

She did not mince words decrying the Republican Party leadership after Romney's loss to Barack Obama, stunning the attendees at a special dinner for big donors after the 2012 election. The loss reportedly prompted the Mercers to impose strict controls and checks on the way their donations were being spent.

What is the Mercers' stake in right-wing politics?

The family's influence seems to have grown suddenly in the wake of the so-called Citizens United verdict in 2010, when the US Supreme Court removed nearly all limits on corporations and individuals donating to politicians.

By 2011, the Mercers started attending seminars set up by well-known billionaire conservatives Charles and David Koch, also known as the Koch brothers. The Mercers have fed millions into Koch's political organization.

In 2012, Rebekah Mercer joined the non-profit Government Accountability Institute founded by Steve Bannon. The group produced a book on corruption allegations against Bill and Hillary Clinton called "Clinton Cash" and another one on the Bush family, dubbed "Bush Bucks," despite the latter being a Republican political dynasty.

The Mercers hold a major stake in a company called Cambridge Analytica, which uses digital data to tailor election propaganda to voters. They are also major donors to the Media Research Center, which aims to neutralize "left-wing bias in the news media."

What is the Mercers' connection with the Trump campaign and Steve Bannon?

The Mercers first met Andrew Breitbart, the founder of what is now Breitbart News Network in 2011. Through him, they soon met Bannon, who took over the reins after Breitbart died of a sudden heart attack in 2012. According to the New Yorker magazine, Bannon served as the Mercers' de facto political adviser.

The Mercers also invested $10 million in Breitbart and gained a large stake in the nascent company.

The billionaire family originally funded Ted Cruz's presidential campaign, before switching to Trump after his primary win. After Trump won the Republican nomination in 2016, the Mercers called for "all hands on deck" to ensure his victory, while also claiming that Hillary Clinton "would repeal both the First and Second Amendments" if elected. (The First Amendment guarantees free speech, the Second gun ownership.) The family donated money to the campaign and the Cambridge Analytica company was also hired to help with the effort.

Companies linked with the Mercers reportedly produced anti-Clinton content, with deeply conservative Breitbart playing the leading role. Some reports say that it was Rebekah Mercer who pushed Trump to hire Steve Bannon as his chief executive and Kellyanne Conway as campaign manager.

With Trump winning the general election, Rebekah Mercer served as a member of Trump's transitional team. She was reportedly behind the appointment of Michael Flynn, who briefly filled the post of the national security advisor before being forced to resign.

Steve Bannon once praised the Mercers for laying the "groundwork" for the Trump revolution, saying that their impact was even bigger than that of the Koch brothers.

What caused the Mercers to break up with Breitbart and Bannon?

The cracks between the billionaire family and the news outlet became clearly visible in November 2017, when Robert Mercer announced he would sell his Breitbart stake to his daughters. In a letter to employees, Mercer criticized the notion that his "politics marches in lockstep with Steve Bannon's."

"I have great respect for Mr. Bannon, and from time to time I do discuss politics with him," he said in the letter carried by the US publication Business Insider. "However, I make my own decisions with respect to whom I support politically. Those decisions do not always align with Mr. Bannon's."

Mercer also bluntly criticized the former Breitbart writer Milo Yiannopoulos, whom he previously supported in his fight for free speech, after Yiannopoulos made controversial remarks on pedophilia.

The feud was blown open last week, when Rebekah Mercer publicly distanced her camp from Bannon after his supposed remarks on Donald Trump Jr.

"My family and I have not communicated with Steve Bannon in many months and have provided no financial support to his political agenda, nor do we support his recent actions and statements,” she said, pledging her support to "President Trump and the platform upon which he was elected."

According to the New York Times, Bannon initially denied the rumors that the Mercers were cutting him off and insisted that everything was fine.

"The Mercers haven't given me money in years,” he told multiple people, according to the newspaper. He also reportedly refused to admit any mistakes on his part.

He was forced to resign just days later.