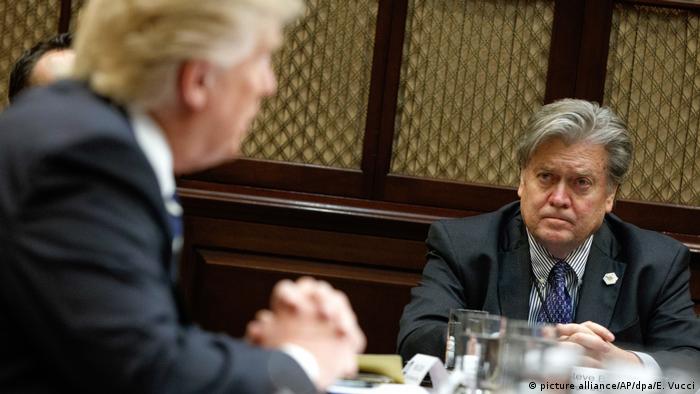 Steve Bannon, a former top aide to US President Donald Trump, sought to make amends with the White House on Sunday, after incendiary comments aimed at the president's son led to him being condemned and mocked by his erstwhile political allies.

After accusing Trump's eldest son, Donald Trump Jr, of committing treason by meeting a Kremlin-linked Russian lawyer, Bannon reversed his comments by reaffirming his support for the administration and praising Trump Jr as "both a patriot and a good man."

Bannon, who was ousted from the White House in August, was quoted in the book "Fire and Fury: Inside the Trump White House" by journalist Michael Wolff as saying that a pre-election meeting involving Trump Jr and a Russian lawyer was "treasonous" and "unpatriotic."

He added that a prosecutors' probe into possible collusion between Trump campaign officials and the Kremlin would "crack Don Junior like an egg on national TV."

Despite backtracking, Bannon stopped short of denying the comments.

Bannon sought to clarify his remarks, saying on Sunday that they were directed at former Trump campaign advisor Paul Manafort, who also attended the June 2016 meeting between Trump Jr and the Russians.

"My comments were aimed at Paul Manafort, a seasoned campaign professional with experience and knowledge of how the Russians operate," he wrote in a statement first published by news website Axios. "He should have known they are duplicitous, cunning and not our friends. To reiterate, those comments were not aimed at Don Jr."

Bannon, who since leaving the White House has returned to the right-wing news site Breitbart as an editor, added that he regretted the delay in responding to the quotes and for having "diverted attention from the president's historical accomplishments in the first year of his presidency."

Since the remarks became public last week, Bannon has found himself abandoned by financial patrons and mocked by the president himself.

On Saturday, Trump accused Wolff of using Bannon to publish what he has dismissed as false reporting. "He used Sloppy Steve Bannon, who cried when he got fired and begged for his job," the president posted on Twitter. "Now Sloppy Steve has been dumped like a dog by almost everyone. Too bad!"

On Sunday, Trump continued his assault on Wolff and his book, which depicts the president as a mentally unstable and ill-informed man-child who never wanted to win the presidency in the first place.

Trump tweeted Sunday that the "Fire and Fury" was a "Fake Book, written by a totally discredited author."

Trump's senior policy adviser Stephen Miller also appeared on broadcaster CNN to dismiss Wolff as a "a garbage author of a garbage book," and assail Bannon as "vindictive" and "out of touch with reality."

'Fire and Fury': Trump too overwhelmed to consider Europe

The new book depicts a president too consumed with chaos in his own administration to make time for allies. Trump reportedly spent a crucial G20 summit in Hamburg planning how to deal with his children's Russia ties. (05.01.2018)