Milo Yiannopoulous may have gone too far for even his conservative backers. The right-wing commentator has lost a lucrative book deal after comments pertaining to sex with boys as young as 13. 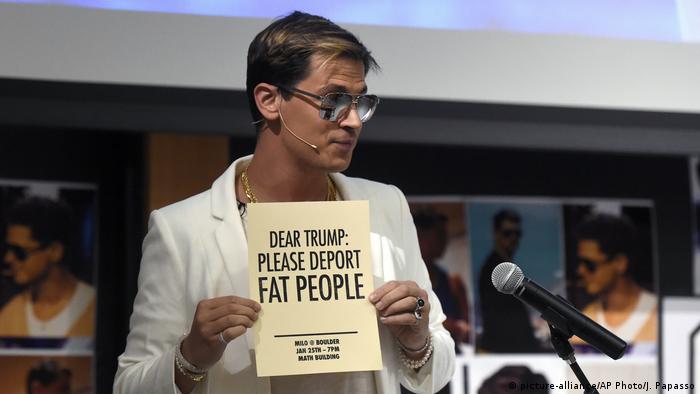 Milo Yiannopoulos has lost a book deal and an invitation to a prestigious speaking engagement, according to media reports Tuesday. The British commentator sparked global outrage after issuing controversial statements on pedophilia and consent, so much so that allegedly even Breitbart colleagues are threatening to quit en masse if he is not dismissed.

The social media storm against Yiannopoulous began over the weekend, when video leaked of him defending older men having sex with 13-year-olds.

"No, no, no. You're misunderstanding what pedophilia means," Yiannopoulos can be heard telling radio hosts in a video chat. "Pedophilia is not a sexual attraction to somebody 13 years old who is sexually mature. Pedophilia is attraction to children who have not reached puberty."

He then went on to call the concept of sexual consent "arbitrary and oppressive."

Publishers Simon & Schuster then announced that their conservative imprint Threshold would no longer publish Yiannopoulos' forthcoming book, "Dangerous," for which he was reportedly paid a $250,000 advance. The 33-year-old Briton later confirmed on Facebook that his book had been pulled.

This was not the first time the alt-right commentator had earned the ire of the internet. The Breitbart technology editor has been an avid supporter of Donald Trump, whom he affectionately calls "Daddy," and proclaimed himself a gay crusader against political correctness whenever he is accused of being racist or misogynist.

He was banned from Twitter for promoting harassment of African-American actress Leslie Jones last July, and called women who complained of sexism in video game culture "an army of sociopathic feminist programmers and campaigners."

Later on Tuesday, Yiannopoulos wrote on Facebook that he had himself been a victim of child abuse, and that it had falsely given him the impression that this gave him free range to air his feelings on the subject.

"My own experiences as a victim led me to believe I could say anything I wanted to on this subject, no matter how outrageous. But I understand that my usual blend of British sarcasm, provocation and gallows humor might have come across as flippancy, a lack of care for other victims or, worse, 'advocacy,'" he wrote. "I deeply regret that."

Twitter has suspended the accounts of several groups linked to the alt-right. The movement, which embraces white nationalism, has seen its profile rise during the recent US presidential campaign. (16.11.2016)

Soldier, banker, Breitbart player: Stephen Bannon already boasts a compelling biography. Its next chapter is shaping up to be even more intriguing, as his power at President Donald Trump's side grows by the day. (02.02.2017)

Gab's founders deny accusations that their platform is an "alt-right echo chamber." Content on the site suggests otherwise. (27.01.2017)