German police wanted to test how many people would stop to help to blood-soaked actresses trapped in a car. Police said they were shocked by how few people were ready to come to the rescue. 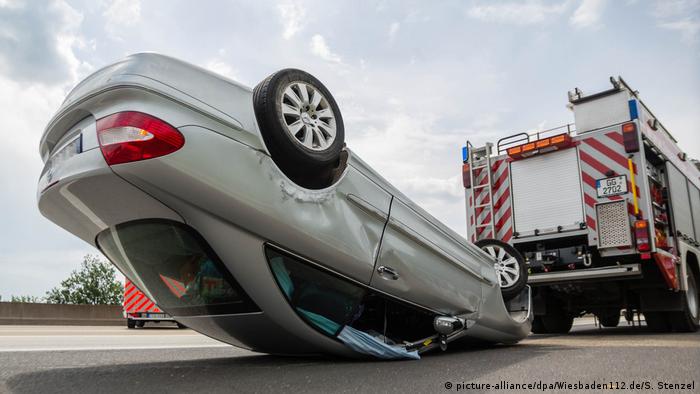 German police set up a fake road accident on national road safety day to test the response of passing traffic, they said on Wednesday.

Police in Oberhavel, in the eastern German state of Brandenburg, teamed up with a local media agency to stage a fake car accident complete with two victims. They wanted to see how many people would stop to help the two young ladies who were still in the vehicle.

The actresses and the car itself were smeared in blood to make it seem more realistic.

Seven hidden cameras were trained on the scene as police hid further up the road and pulled over cars that didn't stop to help.

Police did not inform duped drivers who had stopped that it was fake until they were well into the process of helping. One helper even ended up in tears, according to the press release.

One couple pulled over, called the 112 emergency number, and were comforting the young actresses, according to local newspaper Märkische Allgemeine.

In another case, a motorcyclist desperately waved down two other road users, who then approached the car with a first aid kit and tried to help, the agency's video shows.

How many people stopped

Police Commissioner Robert Müller said: "Many drivers could not explain why they hadn't stopped and helped," as quoted by Märkische Allgemeine. He said conversations with drivers revealed almost everyone knew how important first aid measures are after an accident, but that drivers nonetheless drove on.

Excuses reportedly included not being able to brake fast enough and wanting to stop at the next opportunity.

A legal expert in the Bundestag, Michael Frieser of the conservative Bavarian Christian Social Union criticized the faked accident in comments to the national paper Bild.

"If the police carry out such actions, they should always do so together with traffic clubs such as the ADAC or the ACE. Because this form of road safety education cannot be their job," he said.

But police defended the action as necessary. "Public relations are a very important aspect in raising people's awareness of such situations and explaining how to act correctly in an emergency," Andre Quade, who headed the local police team on that day, told the local paper.

"If you want to reach people, you have to show reality. And reality is actually even harder. The number of accidents is constantly increasing. Not only in Brandenburg, but also in other federal states," a police spokesperson told Bild.

In Germany, people are legally obliged to stop and help in such cases. People who do not render assistance to those in need face one year in prison or a fine.

A 44-year-old man who was paralyzed from the neck down was the first to be authorized for medically assisted suicide. Having no independence left him physically and mentally like a "boat drifting on the ocean," he said.