Three Germans face court for not helping a stricken pensioner

A German court has fined three people for failing to assist an 83-year-old pensioner who collapsed in the lobby of a bank. He later died in hospital. Prosecutors claimed that a 39-year-old woman and two men, aged 55 and 61, failed to provide help to a person in peril, which is illegal in Germany. The law expects such help to be provided "in case of an accident, general danger or emergency" as long as assistance is "needed and expected" under the given circumstances. The same applies, for instance, to road users who are the first on the scene of a car crash.

The suspects encountered the man last October in a bank in Essen, northwest Germany. The incident took place during a bank holiday, meaning that no employees were at the scene, the German Süddeutsche Zeitung reports. However, the building's lobby (pictured above) was still accessible to customers who wanted to use the banking machines.

Ignoring the man on the floor 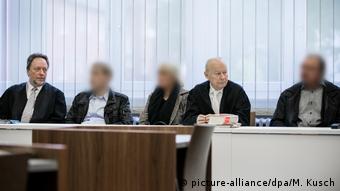 The identities of the suspects are protected under the German law

The 83-year-old pensioner had intended to transfer money using one of the machines. Once in the lobby, however, he slipped and hit his head on the floor. He then attempted to stand up and fell down two more times, remaining unconscious in the middle of the room.

According to the bank's security footage, four customers subsequently entered the lobby and either walked around or over the man's body, and finished their own banking transactions without paying attention to him. Only the fifth person called an ambulance. He died a few days later in hospital.

A medical expert testified in court that the man would have likely died even if help had arrived earlier.

A homeless person looking for shelter?

When asked about the case, at least two of the suspects said they believed that the man was a homeless person sleeping in the heated lobby to avoid staying in the street. However, the man was neatly dressed and had none of the paraphernalia usually seen on homeless people in Germany, such as a sleeping bag, or plastic bags to haul their possessions.

The people were identified based on the video and their banking data. Three of them appeared before court on Monday; the fourth defendant was too ill for court and will be tried at a later date.

The event sparked a debate in German media concerning kindness to strangers and the limits of solidarity in public.