A large-scale raid was carried out at an asylum center in Germany after a failed attempt to deport a Togolese man. Experts say the difficult conditions and limited prospects at such facilities often fuel tension. 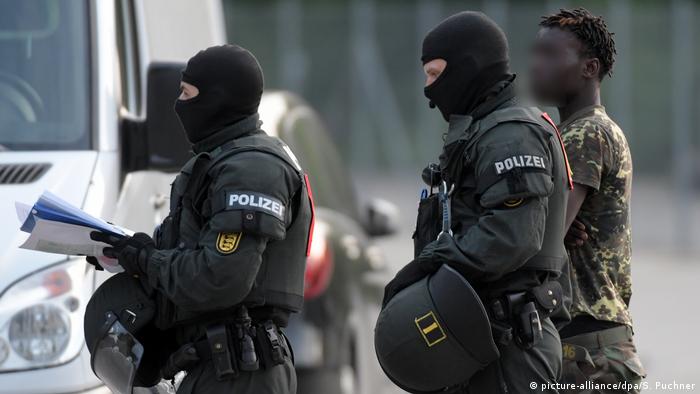 German police sought to re-establish their authority by force at a home for asylum-seekers in the small town of Ellwangen, in the southern state of Baden-Württemberg, after a large and extraordinary operation on Thursday morning.

A 23-year-old from Togo — whose deportation to Italy was prevented by a group of between 150 and 200 asylum-seekers in the early hours of Monday morning — was recaptured during the operation.

Twenty-seven asylum-seekers offered resistance during Thursday's police action, which involved hundreds of armed officers. Some asylum-seekers were injured jumping out of windows.

Police said they had arrested five asylum-seekers on suspicion of theft or drug-related offenses, while 17 inhabitants are to be moved to other homes. The operation was still ongoing at noon, with asylum-seekers being led away, though the situation was described as being "under control."

"We will not allow any law-free zones to be established," Bernhard Weber, vice president of the local police force, said at a press conference on Thursday morning. Peter Hönle, the local officer who directed Thursday's operation, described the situation as "very tense and very overheated."

Deportations had already been carried out "hundreds of times" before without any violent incident, Weber told German channel N24, keen to underline how unusual the situation was. "It was very simple at first, until the four officers tried to leave, when hundreds of people prevented them."

Sean McGinley, head of the Baden-Württemberg Refugee Council's office, told DW that the Ellwangen center had not been considered particularly problematic before Monday's incident — though he said it was one of about half-a-dozen in the state. "There are some general difficulties with these first-reception centers when it comes to these people," he said. "There are conditions there that are not okay, and that are in some cases legally questionable — but I don't know to what extent that can explain the events in the last few days. I do know that people who are deported to Italy are often left on the streets, and that it is understandable that people feel like they are in an emergency situation and that they are very scared, and they want to do whatever they can to prevent it."

"The fact that it is legal to send people away is beyond question, but on a human level you are putting people in an extreme situation," he added. 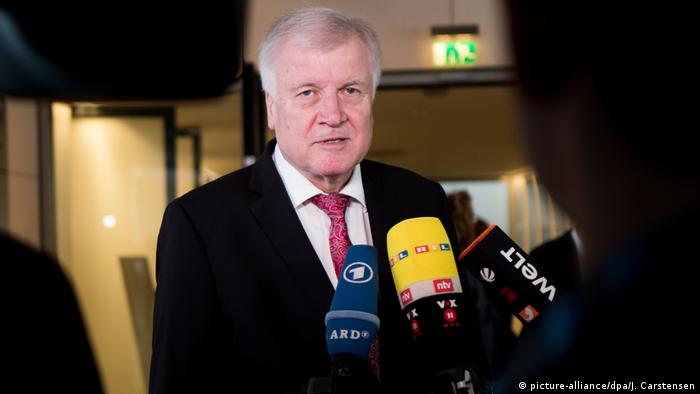 Seehofer's solution is to be build more asylum centers

'A slap in the face'

The incident has created an enormous political media conflagration in Germany, where conservative politicians — spooked by the rise of far-right populists — have been lining up to impose even more stringent measures on asylum-seekers in Germany.

The country's newly sworn-in interior minister, Horst Seehofer, staged his own press conference on Thursday morning to denounce the events in Ellwangen as a "slap in the face for the law-abiding population."

"The right to hospitality must not be trampled on," he added.

Seehofer's solution is to build new "anchor centers" for asylum-seekers across Germany — large-scale facilities where entire asylum procedures can be processed under one roof and where asylum-seekers are forced to spend their entire time — not unlike the first-reception center in Ellwangen. The law was changed last year to allow states to keep asylum-seekers in the first-reception centers for up to two years — which critics say further hinders their chances of being integrated into communities.

Five or six pilot anchor centers are to be prepared for testing across the country in the coming months, Seehofer said, amid criticism from police unions, who argued officers were not trained to "run prisons."

Seehofer is head of the conservative Christian Social Union (CSU), the Bavarian sister-party to Chancellor Angela Merkel's Christian Democratic Union (CDU), which is facing a bitter battle for votes against the far-right, anti-refugee Alternative for Germany (AfD) in Bavaria's state election in September.

But other political parties have questioned whether creating even more large-scale centralized shelters for asylum-seekers is a wise option, considering the events in Ellwangen. "That creates a dynamic and a potential for violence, and it all goes on the backs of police officers," commented Green Party domestic policy spokeswoman Irene Mihalic.

A system programmed to fail

Stephan Dünnwald, of the Bavarian Refugee Council, described the living conditions in large-scale homes in distressing terms. "Imagine you're stuck there with three or four hundred other people and every other night the police come and pick one of you up, and you don't know who is going to be next," he told DW. "That creates enormous tension among the inhabitants." 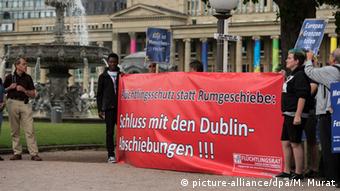 Protests against the EU's Dublin system have been increasing in Germany

Asylum-seekers are often left to live in the homes for months at a time while they wait for their applications to be processed — they are not allowed to look for work in that time, or even to take German classes or do any job training, which leaves them facing some difficult choices. "They sit around and wait to see what happens to them," said Dünnwald. "For one month you might think of it as a holiday, but if you've been sitting there for half-a-year and you can't do anything — nothing at all — then of course you think about what you're going to do: Do I stay here? Do I go into hiding? Do I try and find a job illegally? Or do I start doing something criminal?"

Asylum policy in the European Union is regulated through the so-called Dublin system, which stipulates that migrants must be transferred to the member state where they first entered the EU. In practice that often means Greece or Italy, to where the Togolese man was due to be deported on Monday.

According to Dünnwald, these countries often don't maintain the EU's basic humanitarian standards. "In Italy, most people aren't looked after — they don't get shelter, they live on the streets. They don't get any money, so they have to get by through doing illegal work, or begging, or prostitution," he said. "So obviously people don't want to go back there."

The whole of the EU's asylum policy, in other words, is based on the principle of trying to "scare people off," Dünnwald said.

Crimes of almost every nature dropped across Germany in 2017, according to police statistics. But there were a few categories in which rates increased. (22.04.2018)

German officials defend housing refugees at former US base

In Bavaria, one model "reception center" is home to more than 1,300 asylum-seekers. Directors say the barbed-wire enclosure and lack of privacy are for "safety" and efficiency. One resident says "it's a wasted life." (31.03.2018)