A group of seven young men beat to death a firefighter in front of his wife and another couple after they visited Augsburg's Christmas market. The murder has shocked the city and the wider state of Bavaria. 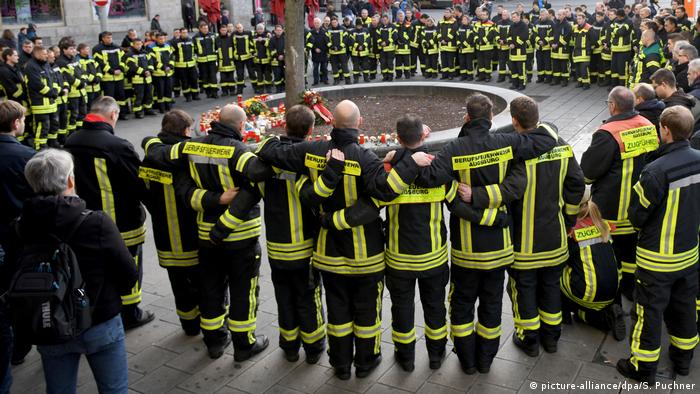 Police in southern Germany on Sunday arrested suspects in the murder of a 49-year-old firefighter, whose death has shaken Bavaria.

The firefighter was with his wife and another couple when they were attacked by a group of seven young men on Friday night after leaving a Christmas market in the city of Augsburg.

Police reported the victim was fatally struck on the head following a dispute with the group that also left the firefighter's male friend badly injured. Both women were unharmed.

Bavarian authorities said Sunday two suspects had been arrested following an investigation and a large-scale manhunt.

They were working to identify other members of the group using video footage from the scene.

On Sunday, more than 100 firefighters in the city gathered at the site of the crime to honor their colleague.

"What has really upset me is that a peaceable citizen was killed in Augsburg, simply beaten to death," Seehofer said in a television interview on Sunday.

A German court sentenced 22-year-old Iraqi national Ali B. to life in prison for raping and killing a 14-year-old girl in Mainz. The man had admitted to murder but insisted that he and the girl had consensual sex. (10.07.2019)

Annegret Kramp-Karrenbauer has said the murder of a Georgian activist earlier this year was straining relations between Berlin and Moscow. She urged the Kremlin to step up efforts to support German investigators. (08.12.2019)