Annegret Kramp-Karrenbauer has said the murder of a Georgian activist earlier this year was straining relations between Berlin and Moscow. She urged the Kremlin to step up efforts to support German investigators. 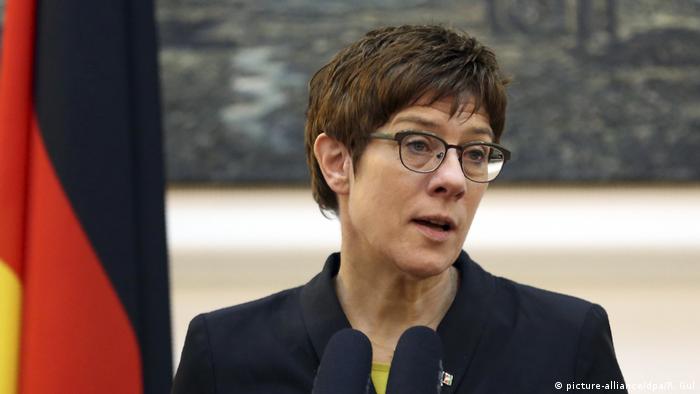 Annegret Kramp-Karrenbauer said Sunday Russia must take further action in the investigation into the murder of a Georgian man on August 23.

Zelimkhan Khangoshvili, a 40-year-old Georgian activist, was shot at point-blank range by a cyclist in a small park in the Berlin neighborhood of Moabit.

The victim, an ethnic Chechen, is said to have fought against Russia in the Second Chechen War and is believed to have had ties to Georgian military intelligence.

The German Foreign Ministry suspects Russian intelligence agencies played a role in the assassination of Khangoshvili.

"The evidence weighs heavily," Kramp-Karrenbauer, who serves as both defense minister and leader of Chancellor Angela Merkel's conservative Christian Democrats, told the German newspaper Bild am Sonntag. "Together with the killings in the UK and other Russian activities, it paints a rather disturbing picture."

Germany's federal prosecutor has assumed responsibility for the investigation into the murder.

"The federal government will have to discuss and decide on further reactions ... The Russian side must now finally make its contribution to the investigation of this crime," she said.

Chancellor Merkel had criticized Moscow for not effectively supporting Germany in the probe.

On Friday, a government spokesperson confirmed Merkel will meet with Russian President Vladimir Putin on Monday in Paris ahead of a summit on Ukraine hosted by French President Emmanuel Macron.

Germany is also investigating whether Khangoshvili's murder has a possible connection to officials in Chechnya. Chechnya is a republic within the Russian Federation with its own constitution but is still controlled by Moscow.