Germany has sent 240 soldiers to southern Turkey as part of a NATO mission using Patriot missiles to deter cross-border airstrikes from war-torn Syria. Units are also being provided by the Netherlands and the US. 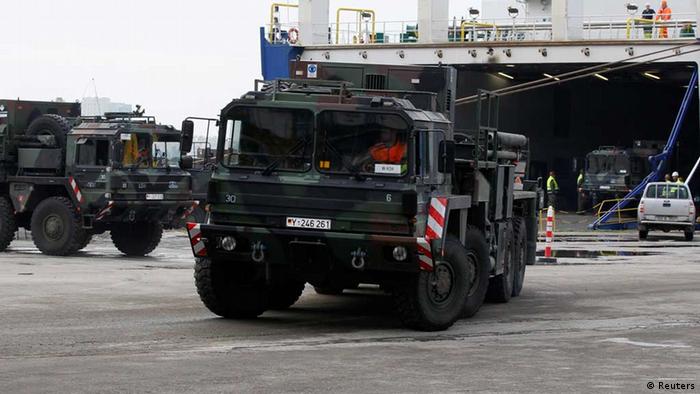 The main German contingent flew out of Berlin Sunday, headed for Kahramanmaras, 100 kilometers (62 miles) inside Turkey's border with Syria, where two German Patriot units are to be fully operational by early February.

An advance Bundeswehr team is already on site and the missiles with launch equipment arrived by ship in Turkey on Monday. The deployment will number some 350 German soldiers, including medics.

The NATO alliance agreed in early December to the stationing of two units from each of the three NATO partners at the request of its member Turkey after Syrian shelling along the border killed five Turkish civilians in October. NATO said it was a purely defensive move.

Germany's Bundestag parliament approved the deployment - limited to one year - on December 14.

Syria's allies, Iran and Russia, opposed the Patriot deployment, saying they feared that it could spark regional conflict that could draw in NATO.

German Defense Minister Thomas de Maiziere said the Patriots should have a "deescalating effect" on Syria where forces of President Bashar Assad and rebels have clashed for nearly two years.

"We learnt during the Cold War that deterrence can only function when in doubtful moments one is ready to use the weapons," de Maiziere told the Neuen Osnabrücker newspaper on Saturday.

"Should Syrian rockets be fired at Turkey then NATO will use the Patriot missiles," he said, adding, however, that he did not expect the German Bundeswehr troops to be involved in combat.

Turkey's border with Syria is 900 kilometers (560 miles) long. The Dutch, German and US Patriots will be stationed around three southeastern Turkish cities.