German parliament approves extension of anti-IS mission from Turkish base

Parliament has passed an extension of the Bundeswehr's anti-IS mission. Tensions with Turkey have made the mission controversial. 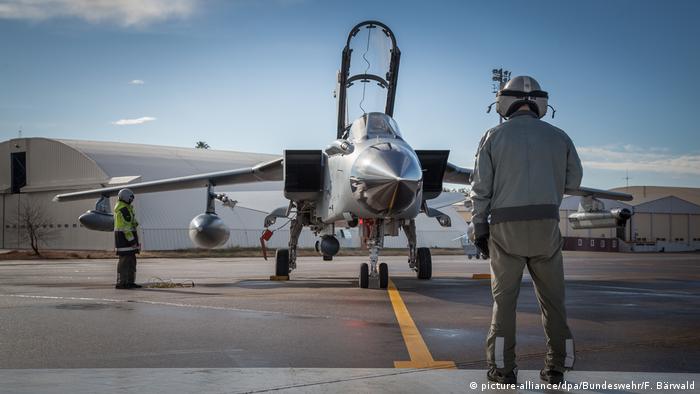 German lawmakers on Thursday approved a renewed mandate for the Bundeswehr's anti-"Islamic State" (IS) mission despite tensions with Turkey where its reconnaissance and refueling aircraft are based.

Parliament approved the extension for a year by 445-139 vote, with the opposition Greens and Left Party opposed.

German Tornado reconnaissance jets fly missions from Incirlik over Iraq and Syria in support of the US-led coalition against IS, which is also based there. The Bundeswehr also has a refueling plane at the base providing fuel to coalition aircraft. About 250 troops are stationed at the base.

The mandate also encompasses 200 soldiers aboard the German Frigate Augsburg, which supports the French aircraft carrier Charles de Gaule in the Mediterranean. French jets strike IS targets in Syria and Iraq from the carrier.

German forces are not authorized for combat missions and the contribution is capped at 1,200 soldiers.

In the future, Germany soldiers will also be deployed on NATO AWAC-reconnaissance aircraft, which will be based in near the Turkish city of Konya in a mission to collect surveillance on IS targets. One-third of NATO's AWAC personnel are from the German military.

Germany first deployed its military assets to Turkey following the November 2015 Paris terror attacks in an act of solidarity with France, but the mission has since come into question amid rising tensions with Turkey.

German-Turkish relations have been strained since parliament passed a resolution in June calling the 1915 Ottoman massacre of Armenians a genocide. In response, Turkey prevented German lawmakers from visiting troops stationed at Incirlik airbase, only to reverse the decision after Berlin said the resolution wasn't binding.

Relations between the two NATO allies have taken further blows in the aftermath of a failed coup in July and President Recep Tayyip Erdogan's subsequent crackdown that has Germany worried over the democratic trajectory of the country.

Incirlik played a significant role in the coup bid, with Turkish aircraft piloted by coup plotters taking off from the base. The Turkish commander at Incirlik was arrested and the base briefly shut down, raising questions over security.

Not a message of support to Turkey

In extending the mission, lawmakers emphasized that it was meant to support the international mission against IS and protect Germany against terrorism, not to support Turkey.

Niels Annen, the foreign affairs spokesperson of the Social Democrats (SPD), the junior coalition partner of Chancellor Angela Merkel's conservatives, said the mandate "was not a mission for Turkey and especially not for the Turkish government or its President Erdogan."

The SPD had been wary of extending the military mission at Incirlik, but this was overcome after reaching a deal in the defense committee that lawmaker visits to soldiers on the base would be ensured and that Germany look for alternatives to Incirlik.

The Left Party opposed the mission because it said lawmakers did not have continuous free access to visit troops at the base. Left party external affairs spokesman Jan van Aken had requested to visit Incirlik but has still not heard back from Turkish authorities, the party said.  It also questioned the a Bundeswehr investment of nearly 60 million euros ($65 million) at the base.

The opposition Greens, meanwhile, expressed concern about what was being done with intelligence gathered by German jets. Green lawmaker Omid Nouripour questioned whether as a NATO member Turkey was receiving intelligence that could be used to target Syrian Kurdish fighters, who Turkey has occasionally attacked with artillery and fighter jets despite being backed the by United States in the fight against IS.

At the beginning of the mission, the German government prohibited the transfer of pictures of Syrian Kurdish positions to Turkey, who views them as an extension of the Kurdistan Workers' Party fighting against Ankara.