German Defense Minister Ursula von der Leyen has said Germany needs to stick around to deliver training to Iraqi troops. She warned that "Islamic State" still has an ideological foothold. 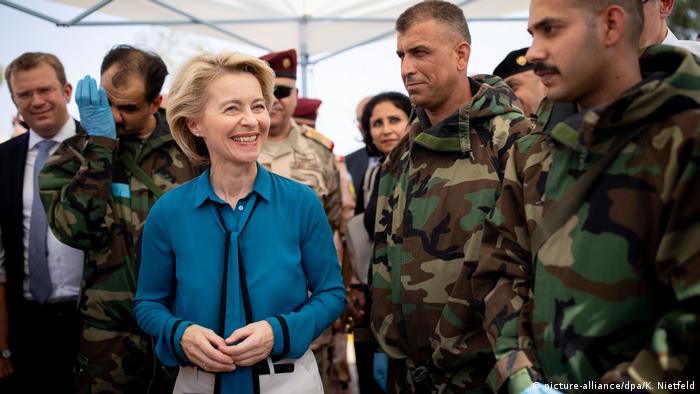 Although the "Islamic State" (IS) group has suffered major military defeats in Iraq, the terror group still has an ideological foothold, the German defense minister warned.

"The fight against IS has left behind deep wounds and scars in the country," von der Leyen said, adding: "it takes patience for these scars to heal and for Iraq to become strong."

She said that the focus of the Bundeswehr's mission in Iraq was "to gain peace."

A German parliamentary mandate for the military assistance program in Iraq was extended in March this year and is due to expire on October 31. It will likely be extended as well, although there has been pushback from the junior coalition partner in Chancellor Angela Merkel's government, the Social Democrats.

Von der Leyen met with her Iraqi counterpart, Irfan al-Hayali, on Sunday and toured a military base in Taji, located around 30 kilometers (18.6 miles) north of the capital, Baghdad.

On August 11, a pilot project kicked off at the base where German soldiers train Iraqi troops in logistics, paramedic training and defusing explosive devices.

The comments came at the end of the second day of von der Leyen's trip to Iraq. She arrived in Baghdad on Saturday after visiting German troops in Jordan, where the international anti-IS coalition is stationed.

Berlin also has about 150 troops stationed in northern Iraq to train Kurdish peshmerga and runs a pilot training program north of Baghdad.

Germany has provided Iraq with around €1.4 billion ($1.63 billion) in development and humanitarian aid, making the country one of the largest recipients of German foreign assistance.

Syria, Iraq, Afghanistan: When it comes to the German military's foreign missions, leaders in Berlin tend to be hesitant. Chancellor Angela Merkel's rejection of a Syrian deployment continues that tradition. (12.04.2018)

After nearly 15 years of war, the Iraqi government has estimated over $90 billion will be needed to rebuild the country. To raise that, it must look abroad for help — but landing outside investment can prove complicated. (14.02.2018)