Horst Seehofer has threatened to go it alone if a compromise with Merkel's CDU cannot be achieved soon. Seehofer insists on stricter border checks, while Merkel is focused on a longterm EU-wide strategy. 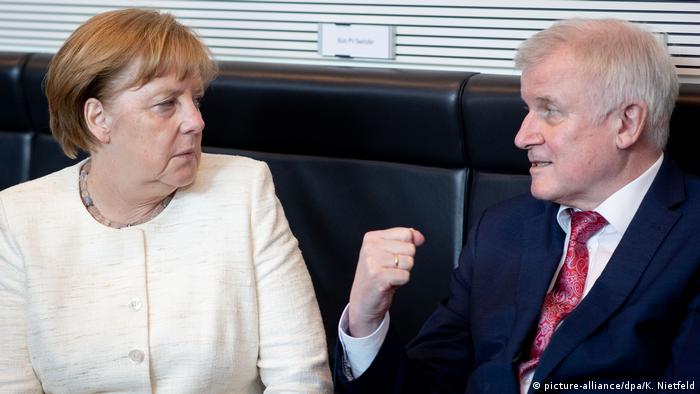 On Thursday morning, the Bundestag's plenary session had to be interrupted to allow for separate meetings of each party's parliamentary group on the country's migration and asylum policies.

According to media reports citing persons involved in the negotiations, Seehofer has told Merkel he would go it alone, if no compromise can be reached and that he would use a so-called "ministerial authorization" to implement his plan.

It comes after talks between the two as well as Bavarian Premier Markus Söder, Hesse Premier Volker Bouffier and Helge Brown, head of the Chancellery late on Wednesday, ended without a breakthrough.

Earlier in the week, Seehofer's "migration masterplan," which was to be presented on Tuesday, was delayed, reportedly because of opposition from the Chancellery.

The main sticking point between Seehofer, who is from the Bavarian Christian Social Union, and Merkel's Christian Democratic Union is Seehofer's demand that border states like Bavaria should be allowed to refuse asylum-seekers trying to enter Germany if they have registered in another EU state or have been refused asylum in Germany already.

Read more: How Germany became a country of immigrants

Merkel, however, is keen to prevent unilateral steps by Germany that could rile other EU members and further weaken efforts for a migration policy deal for the entire European Union.

According to German news agency DPA, she offered Seehofer and Söder a compromise, suggesting bilateral agreements between those EU countries most affected by incoming migrants and asylum-seekers, such as Italy and Greece.

On Thursday morning, Söder briskly rebuffed the suggestion, telling reporters that Germany had to act fast and "set an example" instead of waiting for a pan-European solution. He said he had little "trust" that anything could be achieved "within two weeks that couldn't be achieved in the last three years."

"We have to consider our own people, not always focus on the whole of Europe," he added.

Seehofer's CSU and Merkel's CDU, which are in a coalition government with the Social Democrats, have been struggling to find a common line on migration, with the CSU's hardline stance at odds with the rest of the government.

Seehofer has, however, found a supporter in conservative Austrian Chancellor Sebastian Kurz, a vocal critic of Merkel's migration policy since 2015.

Kurz has suggested an"axis of the willing" among Austria, Germany and Italy, ultimately aimed at reducing illegal migration. He called Seehofer a "strong partner" for Austria, putting further pressure on Merkel.

On Wednesday, Seehofer was widely criticized for spurning Germany's annual integration summit and, instead, sending one of his deputies.

The dispute between the chancellor and her minister was criticized by both the opposition Left party and coaltion partners the Social Democrats (SPD), who said that the spat was impeding the business of government.

Manuela Schwesig, a former minister in Merkel's third cabinet and the current state premier of the state of Mecklenburg-Western Pomerania, complained that she could not make plans on how to implement policy if "none of the state premiers are at the table as suggestions are being discussed."

Surely, she said, members of the federal government can "speak to each other rationally, politely and substantially," for the good of Germans expecting answers from their leaders.

Once again, Chancellor Merkel and Interior Minister Seehofer are at each other's throats as they argue over how to deal with asylum seekers. But that only strengthens right-wing populists, warns Marcel Fürstenau. (13.06.2018)