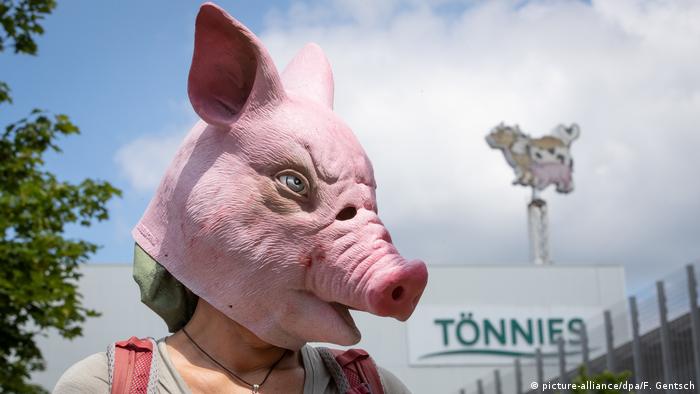 More than 1,300 people have tested positive for the virus after an outbreak at the Rheda-Wiedenbrück meat processing plant, in the district of Gütersloh near Bielefeld, operated by German meat giant Tönnies.

"There must be a civil liability of the company," Heil told a Bild online broadcast, adding that the company had "taken an entire region hostage" by violating the coronavirus rules.

Heil said that his trust in the Tönnies company was "equal to zero." He said that the company not only endangered its own employees, but also "public health."

Regional officials said the virus had largely been contained to the factory's mostly Romanian and Bulgarian workers, but the outbreak has prompted fears of wider community transmission and a return to large scale lockdowns.

The plant's 6,500 workers, who live in cramped company-provided accommodation, have been forced into quarantine. However, authorities have been hampered by poor documentation by the company.

Schools and daycare centers in the area have been ordered to shut and the plant has been closed.

Following the outbreak, Germany's coronavirus all-important reproduction rate surged to 2.88 — almost three times what it needs to be to contain the outbreak. The reproduction rate, or 'R' value, estimates how many people an infected person passes the virus to. Experts say a rate of less than 1 is needed to eliminate the disease.

The 7-day 'r' value, which tends to fluctuate less dramatically, increased from 1.55 on Saturday to 2.03 on Sunday.

Company boss Clemens Tönnies, who initially blamed his Eastern European workers for the outbreak, publicly apologized on Saturday saying he was "fully responsible," but refused to step down.

Green faction leader Anton Hofreiter appealed to the billionaire to cover the costs incurred by the virus outbreak from his own coffers.

If Tönnies meant his apology seriously, "he would pay the costs out of his private assets — not out of the company's assets," Hofreiter told the same show.

Heil told the broadcast: "The exploitation of people from Central and Eastern Europe, which has obviously taken place there, is now becoming a general health risk in the pandemic with considerable damage." Therefore, "there has to be a fundamental change in this industry."

Heil's colleague and SPD leader Norbert Walter-Borjans called for higher meat prices and a debate on distributive justice in Germany.

"Meat is a product that is produced with a high input of energy and other raw materials. Its value and price are often in stark disproportion," Walter-Borjans told the Redaktionsnetzwerk Deutschland newspaper group.

He said the Tönnies case showed "how little attention is paid to the question of how food — our most important basis of life — is produced." Everything is "subordinated to the pursuit of profit and efficiency."

'Employees are not to blame' for coronavirus outbreaks

Yet another German slaughterhouse has registered a massive outbreak of the coronavirus. Roughly two-thirds of the test results so far have come back positive. (17.06.2020)

Germany's meat industry is a valuable part of its economy, but it is being heavily criticized following multiple coronavirus outbreaks. DW looks at the money big companies make, and conditions for workers. (19.06.2020)

Schalke shut the door on Tönnies despite financial woes 07.01.2021

Despite the sporting and financial crisis facing Bundesliga side Schalke, the club have refused an offer of help from ex-supervisory board chairman Clemens Tönnies. No other person divides the club like the 64-year-old.