The director of Germany's Federal Employment Agency has said the country's economy can currently accommodate 350,000 migrants per year. His comments come as the coalition wrangles over proposed changes to asylum law. 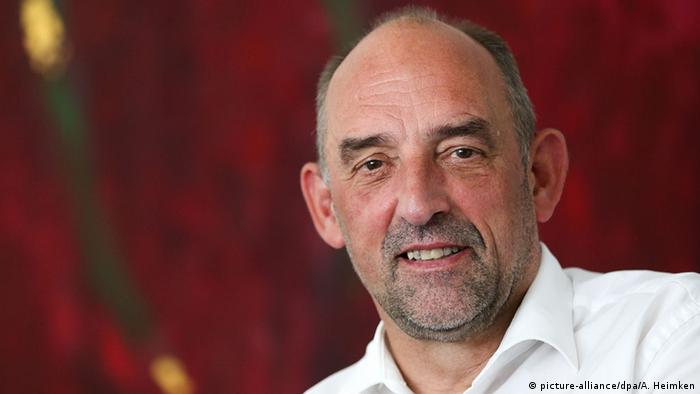 According to Detlef Scheele, the executive director of the Federal Employment Agency, Germany's labor market has the capacity to absorb about 350,000 refugees per year, at least in "purely quantitative" terms "at the moment."

In Monday's edition of daily newspaper Die Welt, Scheele is quoted as saying that this would be possible based on the roughly 700,000 new jobs currently being created per year in Germany - where unemployment is at record lows while fertility rates remain sluggish. Scheele stressed, however, that his figure was based on the employment outlook.

"Whether our country can cope with this more generally, is another question. In any case, the labor market does have this capacity," he said. 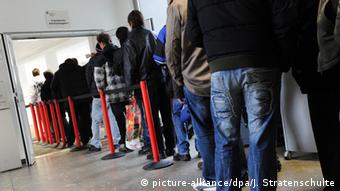 Despite regional discrepancies, German overall employment has been booming of late

He also warned against expecting that refugees who have recently fled to Germany will swiftly plug high-skilled gaps in the country's labor market. "We assume that 10 percent of the refugees will be able to find a job after one year, 50 percent after five years, and 75 percent after 12 to 13 years," Scheele told the newspaper. He emphasized the importance of integrating refugee children and teenagers into the regular education system. If this works, he said that over time, it would contribute considerably to reducing higher skills shortages in Germany.

At the moment, Scheele conceded, the Federal Employment Agency hardly knew anything about the asylum-seekers' qualifications. However, the goal was to adapt their skills to the requirements of the German labor market as quickly as possible.

Last year, about 1.1 million asylum-seekers came to Germany, many of them from Syria and other war-torn regions.

Meanwhile, Germany's proposed new package of asylum laws should take another step closer to debate in the lower house of parliament, the Bundestag. 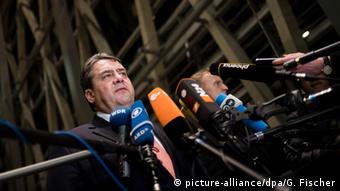 Economy Minister Sigmar Gabriel questioned part of the bill, crucially after it had cleared cabinet

Interior Minister Thomas de Maiziere, a Christian Democrat, and Social Democrat Justice Minister Heiko Maas were to meet on Monday to continue talks on the bill, which became contentious only after approval from Chancellor Angela Merkel's cabinet.

After the cabinet agreed, Social Democrat (SPD) leader and deputy chancellor, Sigmar Gabriel, criticized a provision making it harder to reunite divided families. Gabriel said on public broadcaster ARD that the decision to include children in this, not to guarantee that their parents might join them in Germany, was a part of the bill nobody had discussed with him. He said that he learnt of the change via ARD's reporting.

Politicians from Merkel's Christian Democrats and their Bavarian sister party, the CSU, said no changes were made to the bill.

"We are very surprised by the working and behavior of the SPD," CDU parliamentary floor leader Thomas Strobl said, saying that the family rule changes "were broadly discussed over a period of weeks." Strobl quipped that "you should be able to expect that the SPD-run ministries read the draft laws closely."

Merkel's chancellery chief Peter Altmaier (CDU) underlined on Monday that the asylum package was approved "with the votes of all the ministers from the Social Democrats, the CDU and CSU." Others went so far as to say exempting children could end up putting them in danger - providing an incentive for families to send their children towards Germany unaccompanied.

"Anyone who wants unconditional reuniting of families for minors is also creating an incentive to send children alone on life-threatening journeys - that's not humanitarian, it's irresponsible," CDU politician Günter Krings told the Rheinische Post on Monday.

Gabriel found support on Monday from Green party co-leader Katrin Göring Eckhardt, who said on ARD television that "families staying together" was a crucial component of integration in a new country.

Despite critical remarks from members of the SPD, Germany's ruling coalition has denied any internal tensions surrounding the latest asylum legislation draft. The government approved the package earlier this week. (06.02.2016)

German Chancellor Merkel travels to Turkey to discuss new measures to manage the refugee influx into the EU. The meetings come as tens of thousands of refugees are hoping for asylum along the Turkish-Syrian border. (08.02.2016)