Germany is planning to drastically reduce its historical "solidarity" tax with its eastern states. The move will mean a significant income tax cut for the middle classes, but Merkel's CDU also wants to unburden the rich. 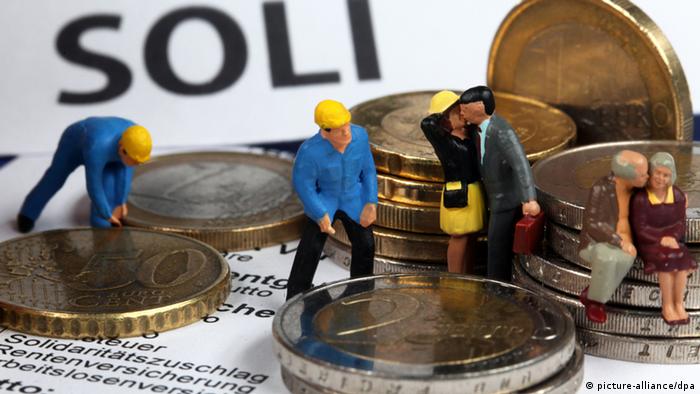 Finance Minister Olaf Scholz presented a draft bill on Friday for approval to other government ministries, which would see 90% of taxpayers completely freed of the solidarity tax. The extra tax, commonly known as the "Soli," amounts to 5.5% of income tax and corporation tax.

Another 6.5% of taxpayers would see their Soli reduced.

The tax, which brought the state €18.9 billion ($21.2 billion) in 2018, was first introduced in 1991 to help cover the costs of reunification and invest in infrastructure in the former East Germany. It was originally meant as a temporary measure but was made permanent in 1995.

Germany's federal government also agreed a "Solidarity Pact" with the state governments in 2001, a plan that is meant to financially support the eastern German states and lift them to economic parity with the former West.

That pact expires at the end of this year, and the president of Germany's Constitutional Court, Hans-Jürgen Papier, concluded in May that the Soli should be abolished by then. He argued the tax would effectively be unconstitutional if no pact was in place as a framework within which to spend the money on the East.

Since 2012, the government has been collecting more money from the Soli than it spends on its eastern states.

The two government parties, Chancellor Angela Merkel's Christian Democratic Union (CDU) and Scholz's Social Democratic Party (SPD), agreed to reduce the tax in last year's coalition agreement. But the CDU is pushing for a total abolition, which would also reduce the tax burden for the upper-income bracket and corporations.

According to calculations made by the daily Frankfurter Allgemeine Zeitung in June, people with middle incomes could save up to €900 per year if the Soli were abolished. Effectively, Scholz's plan means anyone paying up to €33,912 in income tax will not have to pay Soli at all.

"It is good that Finance Minister Olaf Scholz is implementing the coalition agreement and taking the first step toward reducing the Soli," CDU parliamentary group leader Ralph Brinkhaus told the dpa news agency, "but we in the CDU are committed to our aim of abolishing the Soli for all taxpayers." 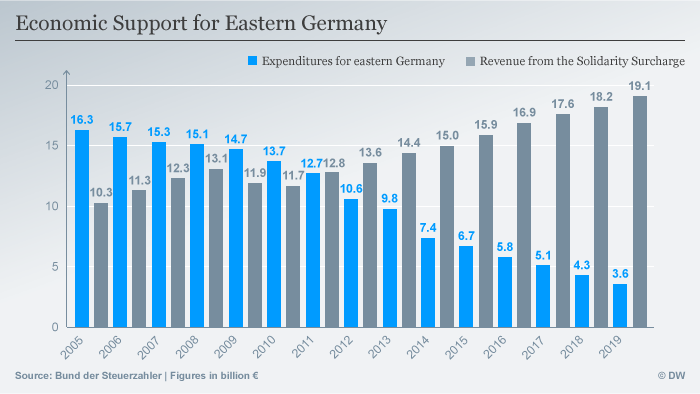 Tax gifts for the rich?

The phrase "first step" also appears in the coalition agreement, though the SPD is apparently reluctant to go further and get rid of the tax entirely.

SPD deputy parliamentary group leader Achim Post insisted that his party remained against getting rid of the Soli. "We want to achieve more tax equality step by step, but we certainly don't want to give away billion-euro tax gifts," he said. "We need the money for investment in education and climate protection."

CDU General Secretary Paul Ziemiak said he was expecting the Cabinet to approve Scholz's draft bill this month, "so that the money gets to the citizens quickly."

But Bernd Riexinger, chairman of the socialist Left party, accused the government of "pursuing policies for the well-off" rather than those that benefit society. "Only a few months ago Finance Minister Scholz was warning against billion-euro holes in the budget. Now he wants to unburden high earners. That doesn't fit together."

An eastern German state premier, Bodo Ramelow, has said Germany should have a national anthem that all the country can sing along to. For him and others, the Nazi associations linger, and East Germans never got a choice. (10.05.2019)

As Germany negotiates a new government, pressure is growing to ax a tax for special economic aid to the formerly communist East. Are Germans tired of paying reunification costs, even as the eastern economy lags behind? (09.11.2017)