Spitting, racist abuse and physical violence — Cologne referees have gone on strike to protest against increasing violence among players. Many amateur league matches were canceled as a result. 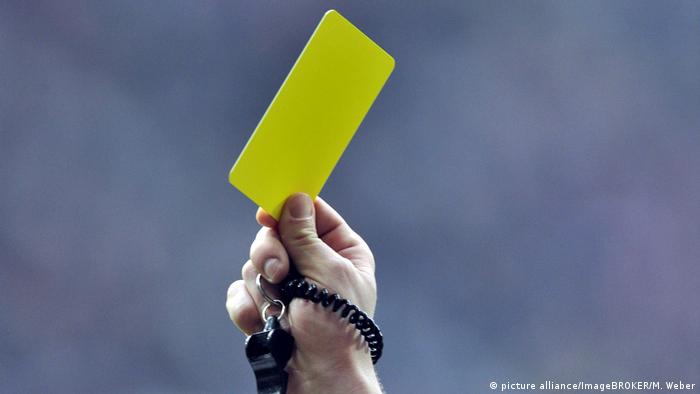 Cologne referees went ahead with a strike on Sunday, protesting against growing violence at local-level matches.

A total of 76 amateur league matches in the amateur Kreisliga Sunday league were due to take place, but most were canceled because of the collective action, according to German local media WDR.

Worst hit were matches in the Kreisliga A division, though the strike affected divisions A to D.

Members of the Cologne Referee Committee reached the decision that it would not provide referees for the amateur level matches earlier this week.

The committee mentioned particular incidents against its members in an online statement posted on Facebook.

During a match between Blau-Weiss Köln and Germania Ossendorf on November 3, a referee was verbally abused and physically attacked by members of the away team and also had a glass bottle thrown at him after awarding three goals to Blau-Weiss Köln.

The statement also highlighted incidents of racist abuse and spitting.

A clear signal against abuse

The referee committee wrote that it wanted to send a "clear signal against violence and increasing brutality to which they find themselves increasingly exposed."

Referees in Cologne said that there had been 10 acts of violence against officials in the past season and another 56 cases of insults or threats.

"The development is alarming, a clear stop-signal must be shown," their statement said.

The committee also demanded better protection at matches and an open dialogue between clubs, players, and referees to combat violence in the future.

The Cologne strike follows a similar strike by local level referees in Berlin against football violence, where the Berlin football federation said it had recorded 109 incidents of violence and discrimination, with 53 of these against referees.

Sebastian Münzenmaier has received a suspended sentence for being an accessory to violence carried out by fans of second-division club Kaiserslautern. But he'll still be able to take up his seat in a parliament. (19.10.2017)

A Turkish Cup semifinal between two of the country's biggest clubs was abandoned on Thursday, after Besiktas boss Senol Gunes was struck by an object thrown from the stands. Gunes needed five stitches in a head wound. (19.04.2018)

Strong language from senior politicians and legislation that enhances police powers has led football fans in Germany to take part in civil rights protests. Some experts expect the situation to escalate. (23.01.2019)

After players were forced to take to the pitch for games they knew would be abandoned last weekend, Spain's new women's league is set to begin. A referees strike that caused the issues has been resolved, for now.