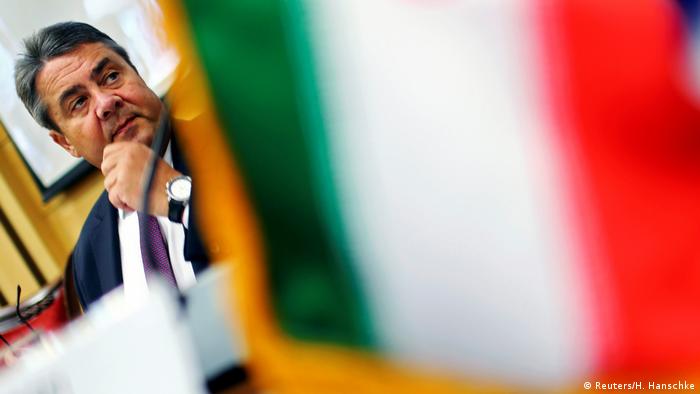 German Economy Minister Sigmar Gabriel on Tuesday wrapped up a two-day visit to Iran with a view to expand trade ties between the two regional giants after the lifting of international sanctions against the Islamic Republic.

Leading a delegation of business representatives on his second visit to the country in 14 months, Gabriel had to balance talks about new business deals with voicing concern over Iran's human rights record and regional politics.

No explanation was given for the cancellation from Tehran, but it sparked speculation in the media that it could have been due to remarks Gabriel made both before and during the trip, in which he addressed Iran's support for Syrian President Bashar al-Assad, the country's human rights record and anti-Israel stance.

However, Gabriel on Monday evening held an unexpected meeting with Iranian Vice President Eshaq Jahangiri, who is close to reformist President Hassan Rouhani.

There were also many opportunities to openly discuss bilateral issues with other officials and business representatives, Gabriel said on Monday evening.

The visit to Iran was a positive step on the road to expanding economic relations after years of sanctions, business representatives said.

"I would not give too much weight to it," Eric Schweitzer, the president of the German Chambers of Commerce and Industry, told Reuters concerning the cancellation of the meeting with Larijani. "In all, the visit was an important step."

After years of tough international sanctions it will take time to rebuild momentum in the relationship, he said. "Now some trust must be rebuilt," Schweitzer said, adding that Gabriel's trip no doubt was helpful in achieving that goal.

Reinhold Festge, the president of the German machine builders association VDMA, told Reuters that he came away with a positive impression after meeting with Iranian officials.

"In this respect, after this trip I am a little more reassured," he said. 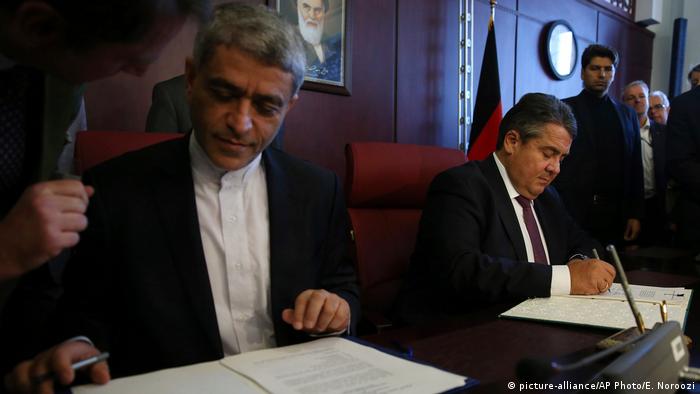 Gabriel and Iran's Economic Minister Ali Tayebnia sign documents at the end of their meeting in Tehran.

Race for a slice of trade

Germany and Iran had strong trade and investment ties before international sanctions were imposed on Tehran over its nuclear program. The lifting of those sanctions in January following a nuclear deal with world powers began a race among countries for a slice of Iran's oil-rich market of 80 million people.

However, the expected benefits from the lifting of sanctions have been slow to materialize due to US sanctions on Iran for non-nuclear activities, including those related to ballistic missiles, human rights and support for terrorism.

European banks have refrained from working with Iran owing to to concern the United States could impose fines for violating a complicated web of other sanctions. To explain their concerns, the banks tend to point to the almost 1.3 billion euro ($1.5 billion) fine that Commerzbank agreed to pay a year ago for violating US sanctions.

Iran has accused the United States of blocking the country's economic integration with the world economy. Lack of financing has upset the potential for major trade deals between Iran and Germany.

"We have earned billions from oil exports, with which we could do some good business with the Germans," Iranian Oil Minister Bijan Zanganeh told the dpa news agency, saying that problems with bank transactions had slowed this process. "That is bad for us and also bad for Germany," he said.

Gabriel said that despite existing financing problems, "German industry is very interested" in the rebuilding of economic relations and "so too are the Iranians."

Figures from the German Chambers of Industry and Commerce show that trade between Germany and Iran reached a volume of 1.5 billion euros between January and July of this year. This represents an increase of 8 percent over same time last year.

The Chamber expects exports to Iran to increase to 5 billion euros in the short-term and possibly double that figure in the long-term.

Germany's Sigmar Gabriel has said that Berlin wants to help Iran regain its economic footing. But he warned that patience was needed in view of the country's long political isolation. (03.10.2016)

Vice Chancellor and Economy Minister Sigmar Gabriel has to juggle business interests with Iran's involvement in Syria's civil war. More than 100 executives and journalists will be on hand to take in the show. (01.10.2016)

As economic sanctions against Iran are lifted, so too are Germans' hopes of increasing bilateral trade with the Islamic Republic. Companies big and small are jostling to get a piece of the action. (18.01.2016)