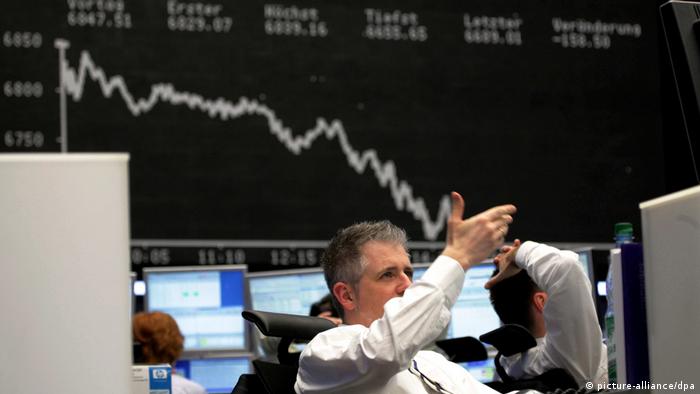 Economic growth in Germany plummeted in 2019, according to the latest figures released by the Federal Statistics Office (Destatis) on Wednesday.

The growth rate is the lowest Germany has seen since 2013 and comes on the heels of news that German Chancellor Angela Merkel's government logged a massive €13.5 billion ($15 billion) surplus last year — reigniting calls for Berlin to spend more.

Global problems and changes: The growth slowdown in Germany has largely been blamed on the trade war between the United States and China — which has hit Germany's export-oriented economy hard. Political uncertainty with Brexit as well as the German car industry's transition to electric power have also taken their toll.

For analysts, the latest figures signal a possible end of an era for Europe's largest economy, which has seen continuous economic growth since 2009.

"The golden decade Germany has seen for growth is gradually coming to an end," Holger Schmieding of Berenberg bank told news agency AFP.

Some analysts pointed to Germany's massive surplus as a path forward to stimulate growth.

"Instead, the surplus should be used to step up investment efforts in the well-known sectors: digitalization, infrastructure and education," he added.

Merkel's government is facing increasing pressure both at home and abroad to relax its strict adherence to its no-new-debts policy known as the "black zero."

The latest data is likely to inflame tensions between Merkel's conservatives and their junior coalition partners, the center-left Social Democrats (SPD).

The SPD has been pushing for higher social spending and more investment — although SPD politician and Finance Minister Olaf Scholz has largely adhered to his predecessor Wolfgang Schäuble's "black zero" policies.

In a sign of possible change, the government announced on Tuesday that it will pump €62 billion into revamping Germany's rail network system.

What do they expect for this year? The German central bank, the Bundesbank, predicts that growth for 2020 will remain on the level as last year. Some analysts, however, believe it could rebound slightly to 1% due to several factors including there being more working days this year.

A study by a major German credit insurer has shown an increasing number of large firms filing for insolvency could have a domino effect on the entire German economy. Weak growth is also predicted for 2020. (29.11.2019)

The German economy has surprised experts by growing slightly in the third quarter. The narrow escape was largely due to consumer spending. (14.11.2019)

The Bundesbank said "unfavorable developments in the gas market" would put pressure on German manufacturers, with signs of an impending recession becoming hard to ignore.