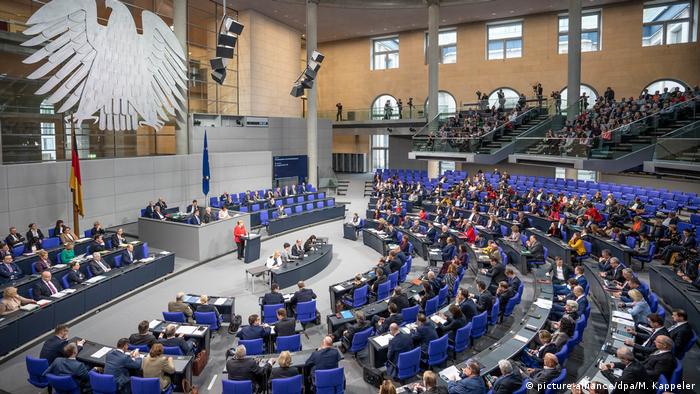 The German parliament passed a budget on Friday announcing next year's investments in defense, kindergartens, public transport, and climate protection, though the latter plans fall short of the demands of the estimated 50,000 climate strike protesters on the streets of Berlin on Friday.

The total German state budget for next year is to be €362 billion ($399 billion), €5.6 billion more than is being spent this year.

"The budget will make sure that we can implement the very important challenges we are taking on," Finance Minister Olaf Scholz told the Bundestag chamber during Friday's debate.

The 2020 budget will include Germany's largest-ever military budget, amounting to some €45.05 billion (compared to €43.23 billion this year), with extra money specifically earmarked for the Bundeswehr's overseas missions and NATO commitments.

That means Germany is approaching its declared goal, agreed by all NATO members, of committing 2% of GDP to defense spending. Next year's defense budget is expected to put Germany at 1.42%. 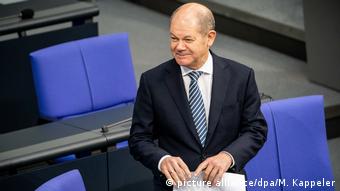 Defense Minister Annegret Kramp-Karrenbauer, leader of the conservative Christian Democrats and currently the most likely to succeed Angela Merkel as chancellor, has frequently promised that the German military would share a greater security burden around the world.

In her impassioned speech in Wednesday's "general debate" in the Bundestag, Merkel herself promised that Germany would meet the 2% target "by the early 2030s," and insisted on NATO's importance as a "bulwark for peace and freedom." But the debate also betrayed small signs of the rift in Merkel's coalition with the Social Democrats, whose parliamentary group leader Ralf Mützenich said his party would not blindly support the "urge" for military dominance.

But Friday's budget debate showed that that has not scotched Kramp-Karrenbauer's defense plans.

The budget, the details of which have been debated in the parliament for four days, also includes some of the first measures in the government's so-called "climate package": the reduction of sales tax on rail tickets, higher taxes on flight tickets, and financial support for buildings that swap out oil heating systems.

However, the climate package itself has also hit obstacles in the upper house of the German parliament, the Bundesrat, on Friday, mainly on the grounds that regional governments were unhappy with the costings.

One of the most important measures for fighting the climate crisis, the introduction of carbon prices, is being delayed until 2021. Carbon pricing remains controversial in Germany — which still has a major fossil fuel industry — even though it is considered one of the most effective ways to reduce CO2 emissions.

Just under 12% of the new budget comprises infrastructure and social investment, amounting to €42.9 billion, expected to go into the expansion and maintenance of roads, new cycle paths, new kindergartens, the digitalization of schools, and a better cellphone network in rural areas.

But the largest single portion of Germany's budget once again belongs to the Labor and Social Affairs Ministry, which administers €150 billion, some €100 billion of which is spent on pensions.

As in previous years, and following the example of his conservative predecessor, the Social Democrat Finance Minister Scholz has pledged not to take on any more debt – maintaining Germany's commitment to the so-called "black zero": a balanced budget. The budget comes at an opportune moment for Scholz: SPD members are about to vote on whether to elect him as their new co-leader. The voting stops at midnight tonight.

However, the news agency DPA reported that this year the balanced budget was only possible because Scholz used €10.63 billion from a fund the government had saved specifically to deal with the 2015 refugee crisis.

Among the opposition amendments rejected by the Bundestag on Friday was the socialist Left party's plan, supported by the Greens, to introduce "gender budgeting," which was supposed to analyze data and provide information on how state budget plans affected gender equality.

Germany is set to significantly raise its defense spending, according to a news report. It would be the biggest increase since the end of the Cold War. (17.05.2019)

The German defense budget is set to increase by almost €2 billion. But it's still not enough, Annegret Kramp-Karrenbauer has warned. Key projects "may be endangered" without more funds for the armed forces. (11.09.2019)