As part of a fresh round of global climate protests, demonstrations are taking place in over 500 German cities — from Aachen to Zwickau. In Berlin alone, over 50,000 protesters are converging on the government district.

Three days before the start of the UN climate conference in Madrid, people have taken to the streets on Friday in 2,400 cities across 157 countries to protest government inaction on climate change.

The Fridays for Future movement said it thought some 100,000 climate strikers would participate in more than 500 demonstrations across Germany. Their demands include:

Thousands of protesters gathered in front of Berlin's Brandenburg Gate to voice dissatisfaction with a perceived lack of urgency on the part of the government. Some 50,000 people took part, demanding a "new start" for the government's climate policy. Young activists in Berlin also took a dip in the city's Spree River to demonstrate their desire for more action.

As protests got underway, Germany's upper house of parliament, the Bundesrat, passed a raft of measures aimed at cutting emissions. The legislation imposes obligations on government departments, forces a rise in fossil fuel prices and reduces the price of rail tickets in an effort to reduce travel by air and car. 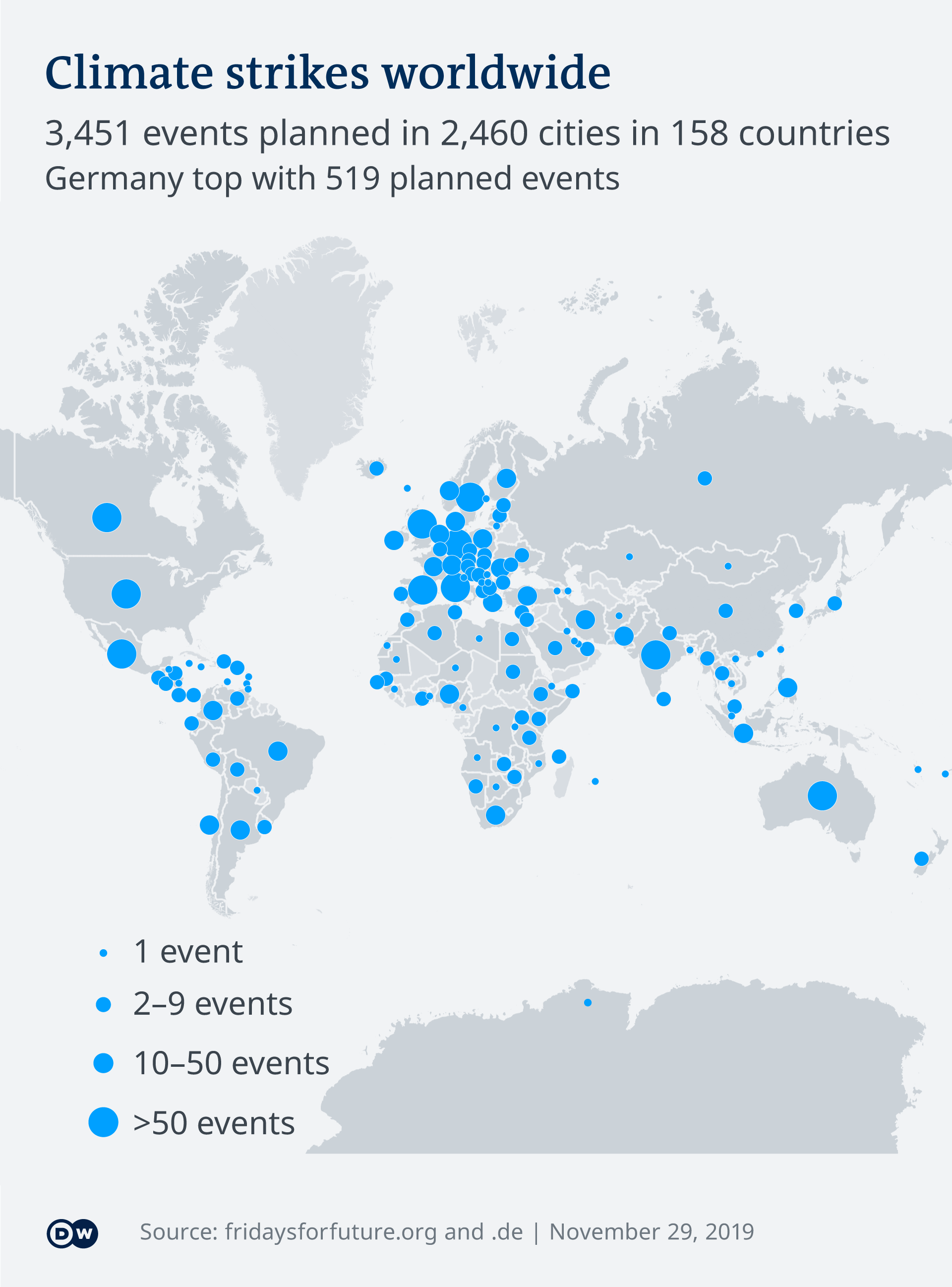 Clara Meyer, from the Fridays for Future movement, told DW the measures did not go far enough.

"The problem is that it doesn't actually target or tackle the problem," Meyer said. "We need a much higher CO2 tax. We see this climate change package as basically just an embarrassment."

Activists and schoolchildren in Australia opened the day of protests by picketing the headquarters of the ruling conservative Liberal Party. Protesters directed their opposition at Australia's Prime Minister Scott Morrison, who has denied that there is any link between his government's climate change policies and bush fires sweeping large parts of the country.

In Japan, hundreds marched through Tokyo's Shinjuku district to show their support for the Fridays for Future movement.

The country has itself been hit by weather extremes in recent years, with increasingly frequent typhoons, and hotter weather. In October, Typhoon Hagibis ripped through central and north-eastern parts of the country, killing scores of people.

The protests took place as negotiators from some 200 countries prepared to meet for the COP25 climate conference in Madrid. Participants are seeking clearer rules on how to meet the requirements of the 2015 Paris agreement on climate change.

The European Parliament on Thursday voted to declare an EU-wide climate emergency. The resolution called on the bloc to cut emissions by 55% by 2030 and become climate neutral by 2050.