German conservatives gear up for fall elections | Germany| News and in-depth reporting from Berlin and beyond | DW | 18.07.2009 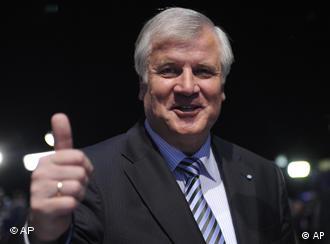 Seehofer sees a bright future for the CSU

Three quarters of a year after taking the reigns of the CSU, Seehofer is coming into his own as he and his party look to a future together with Merkel's CDU.

"The Christian Social Union can once again be confident," Seehofer told some 1000 party delegates at their annual rally in the southern German city of Nuremberg. In his speech, Seehofer pledged his support to Merkel's CDU, but, at the same time, stressed the independence of his party.

On Saturday, it was announced that Seehofer won re-election as CSU party chief with an almost 90 percent majority.

Seehofer reiterated the conservatives' desire to build a federal coalition with the liberal Free Democrats. At federal elections on the 27th of September, Seehofer and Merkel are keen on a "black-yellow" coaltion, which represents a union of the conservatives and the liberals. 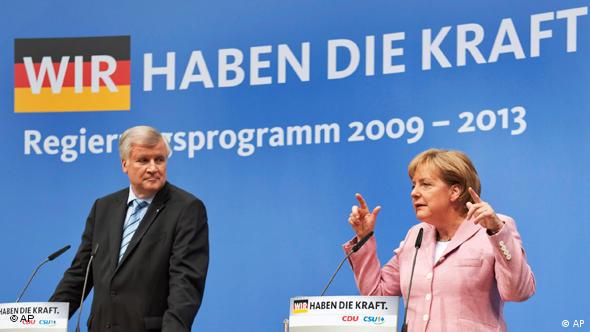 Seehofer warned the head of the Free Democrats, Guido Westerwelle, against not joining the conservatives on the "black-yellow" ticket ahead of the elections, saying it wouldn't be wise to pursue another alliance.

The CSU is pursuing an election campaign that diverges in key issues from that of Merkel's CDU. The central element of the CSU campaign is the lowering of income tax, which it has said it won't back down on.

Despite the ongoing crisis and the flurry of negative economic prognoses, the CSU believes significant tax cuts are necessary and feasible. The tax cuts, said Seehofer, would take effect by 2011.

Another controversial issue Seehofer addressed on Saturday was the CSU stance on the ratification of the European Union's Lisbon Treaty.

The CSU has called for the German parliament, the Bundestag, to have more of a say in European affairs. Seehofer says the CSU is not against ratifying the treaty, but rather for strengthening the national parliament on the European level.

"We're not about destruction; we don't want to blockade the treaty. We want to give Germany's houses of parliament a stronger presence. We want Europe to recognize what it is made of - and we want that our national parliament to have responsibility and be taken seriously."

German Chancellor Angela Merkel has called for unity among squabbling conservatives in the lead-up to September's elections. Merkel is relying on Bavarian conservative Horst Seehofer to help put her back in office. (18.07.2009)