Merkel calls for unity ahead of national elections | Germany| News and in-depth reporting from Berlin and beyond | DW | 18.07.2009

German Chancellor Angela Merkel has called for unity among squabbling conservatives in the lead-up to September's elections. Merkel is relying on Bavarian conservative Horst Seehofer to help put her back in office. 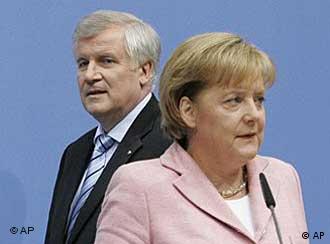 Merkel called on conservatives to be "friendly and amicable"

With only a few short months to go before Germany's federal elections, Chancellor Angela Merkel is leaving no stone unturned as she strives to get her party, the Christian Democrats (CDU), returned to government. This time, she wants to rule without having to form a coalition with the left-wing Social Democrats.

Current polls suggest that she will be able to achieve that goal. To do so, the CDU and Christian Social Union (CSU) - the CDU's sister party in the southern state of Bavaria - would then form a coalition with the business-friendly Free Democrats (FDP).

Yet relations between the conservative CDU and CSU, which form a single parliamentary bloc in Berlin, have been strained of late. The CSU has challenged Merkel's position on two major issues: the European Union's Lisbon Treaty and taxes. 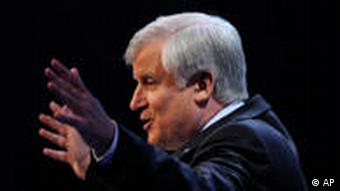 Seehofer told Merkel that the CSU had "bite"

Merkel wants Germany to ratify the Lisbon Treaty before the election on September 27 but the CSU – traditionally more euro-skeptic than the CDU – wants German law to be changed first, which would likely delay ratification of the treaty until after the election. The CSU is also demanding a timetable for tax cuts.

But at the CSU's party convention in Nuremberg on Friday, Chancellor Merkel and CSU leader Horst Seehofer were all smiles – although it may have just had something to do with the fact that Friday was also Merkel's 55th birthday.

Seehofer presented Merkel with a dictionary that translates Bavarian dialect into standard German.

"I can imagine that you sometimes have difficulty understanding us," he said – and Seehofer was surely not just referring to language differences.

On Saturday, Seehofer was re-elected to head the CSU with 88 percent of votes from party members. Merkel called on the two parties to work together.

"Dear Horst Seehofer, we will march in one direction, arm in arm," she said.

Iran called on to allow demonstrations

While in Nuremberg, Merkel also addressed several global issues, including the recent unrest in Iran and the economic crisis.

She called on authorities in Iran to allow citizens there to express their opinions freely, and to be able to demonstrate.

Merkel also criticized the financial industries in New York and London, and said she would push for tougher financial market regulation at the G20 forum.

"We are not going to allow Wall Street and the City of London dictate to us again about how to earn money, only to leave others to foot the bill," she said.

The northern German state of Schleswig-Holstein has plunged into a political crisis after Chancellor Merkel's conservatives voted to end their fraught coalition with the Social Democrats. (16.07.2009)

A fire at one of Germany’s nuclear power stations reignites the nuclear debate ahead of September‘s general elections, with the plant’s Swedish owners admitting the damage was worse than originally believed. (09.07.2009)