Thousands of people in Essen have taken to the streets to protest against neo-Nazi violence. The march is the latest in a series of anti-racism rallies following violent anti-immigrant protests in Chemnitz. 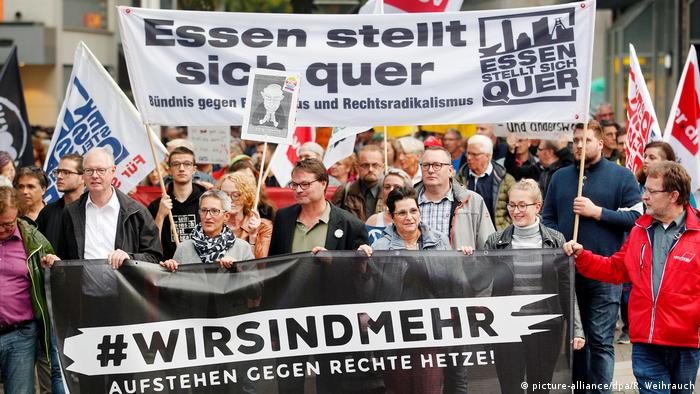 Organizers of the Essen march claimed Thursday's event was attended by 5,000 people who walked through the city center. Police estimated several thousand people took part in the rally that was "totally relaxed."

"Together we stand for cosmopolitanism, democracy, humanism and tolerance. We will not leave the street for the right," the protesters said.

The demonstration was the latest in a series of anti-racism rallies that have been organized following violent anti-immigrant protests in the eastern German city of Chemnitz that were sparked by the fatal stabbing of a 35-year-old German man in August.

The demonstrators united under the motto "wirsindmehr — Aufstehen gegen rechte Hetze," or  "We are more — standing up against right-wing agitation."

"Wirsindmehr" has become a rallying call for anti-right protesters after a concert against neo-Nazi violence and racism in Chemnitz used the phrase as a hashtag earlier this month. More than 65,000 people turned out for the concert.

Daniel H. was stabbed to death in Chemnitz on the night of August 26. Two immigrants have been taken into custody as suspects. Search is on for a third suspect.

In the wake of the Chemnitz demonstrations, Germany is facing tough questions. Civil rights lawyer Nadine Strossen tells DW why the best way to deal with hate is free speech, not censorship. (07.09.2018)

A 33-year-old has been convicted of hate speech and assault after displaying a banned Nazi greeting at a far-right rally. The district court in Chemnitz is fast-tracking trials related to the recent unrest in the city. (13.09.2018)

Prices are rising in Germany. And as they do, more Germans are turning to their local pawnbroker to make ends meet. One small-town pawnbroker predicts that business is only going to get better.