German Chancellor Merkel warns of tough months ahead in pandemic fight | Germany | News and in-depth reporting from Berlin and beyond | DW | 30.09.2020 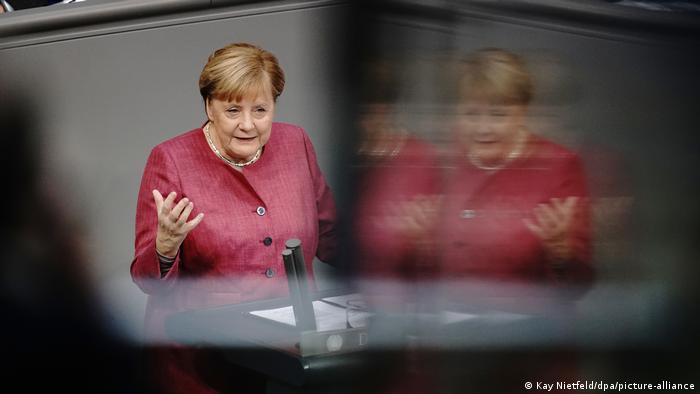 The German government's "quick and energetic" action over the budget helped to cushion the economic blow of the coronavirus pandemic, Chancellor Angela Merkel claimed on Wednesday, as she defended the €96.2 billion ($112.6 billion) of extra debt the government would be taking on in 2021.

The extra lending announced by Finance Minister Olaf Scholz broke an iron rule of German fiscal policy, enshrined in the constitution, and Merkel was keen to promise that "we have to return to a normal and constitutional budget as quickly as possible."

But, speaking to a socially distanced chamber that left enough room only for a fraction of Bundestag members, she insisted that the extra debt had been "the right thing" to cope with the pandemic. 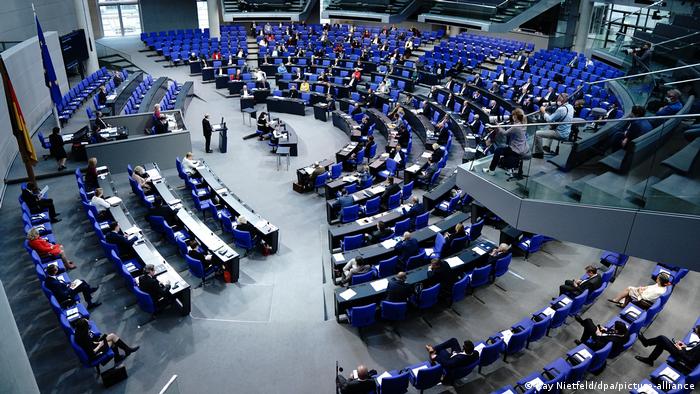 Wednesday's debate was centered on the €96.2 billion ($112.5 billion)in new debt that Scholz is determined to pass and that some opposition politicians argued was the first statement in his campaign to take over from Merkel as chancellor after next year's election.

If agreed by the Bundestag, the amount would be the second-highest sum of new debt ever in modern German history.

Borrowing such amounts has only been possible after the government lifted the so-called debt brake that limits the federal government's structural net borrowing to 0.35% of gross domestic product (GDP). The money is mainly to pay for economic bridging measures to help struggling businesses.

Merkel said she empathized with people's weariness at the distancing rules, which federal and state governments revamped and tightened on Tuesday. "I feel that myself," she said. "Spontaneous meetings are what I miss the most."

She also said she could understand that "especially young people" are becoming more relaxed about social gatherings. "We all want our normal life back, but we're risking losing everything that we've achieved in the meantime," she added. "We want the economy to recover; we want artists to be able to perform again."

"All the rules are no use if they aren't adhered to by the people. This is a long-distance run; we have a long way to go," she said. "This doesn't just protect the old and vulnerable, it protects our open, free society." Merkel also used half of her speech for a whistle-stop tour of the world's most urgent current problems: criticizing China for ongoing human rights abuses and the Kremlin for allegedly allowing the poisoning of opposition leader Alexei Navalny, whom she visited during his recovering in a Berlin hospital.

She also reserved special praise for the women marching against the dictatorship of Alexander Lukashenko in Belarus. She also announced that she would be meeting Svetlana Tsikhanouskaya, the opposition presidential candidate who fled to Lithuania as violence broke out.

Picking holes in the strategy

Most of the opposition speakers joined the chancellor in accepting the necessity of the distancing rules and lauding the German people's sacrifices, but there was plenty of criticism across all the parties for her budgetary solutions.

Speaking immediately after the chancellor, Christian Lindner, leader of the business-friendly Free Democratic Party (FDP), said new debts had become a "state philosophy" under Merkel's coalition with the Social Democrats. "That has nothing to do with emergency help," he said. "If we don't return to fiscal solidity, that will be a signal for all of Europe."

Meanwhile, Dietmar Bartsch, head of the socialist Left party, professed himself baffled that Merkel was spending more on defense than on health and education put together. "We have an education crisis, but no country is threatening Germany," he said. "Why raise the defense budget, even in the middle of a health crisis?" he wondered, before calling on the chancellor to abandon the defense budgetary targets that NATO demands of its members.

Other parliamentarians picked holes in the government's anti-coronavirus measures, while admitting that Germany was riding out the pandemic better than most.Green party parliamentary leader Anton Hofreiter wondered why the Health Ministry had so far failed to come up with a long-term testing strategy (Health Minister Jens Spahn has promised to produce one by mid-October), and why air filtration systems for schools were still unavailable.

Others raised concerns about the plight of the self-employed and small businesses, many of whom have suffered drastic income losses in the past six months.

The most colorful rhetoric came from far-right parliamentary leader Alice Weidel, who said Merkel had turned Germany into a "hippie state steered by feelings" that leads the world in "taxes and expenditures and in taking in asylum seekers from anywhere." The government, she said, had run the economy into the ground during the pandemic.