Mobile vaccination centers will run out of public transport, places of worship and sports facilities to help inoculate another 30 million more Germans. The Greens say more could be done. 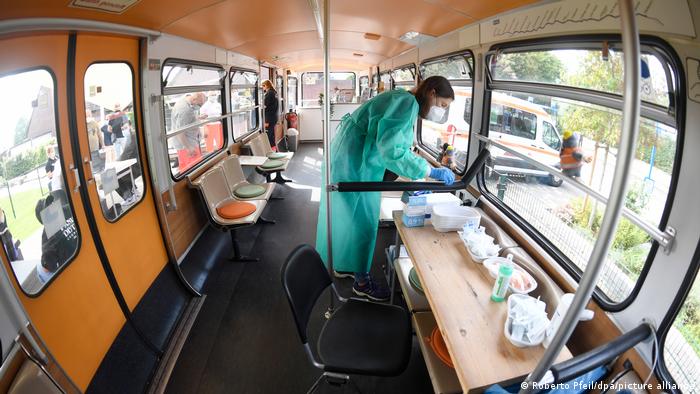 German Chancellor Angela Merkel on Sunday called on more people to get vaccinated against COVID-19 ahead of another week-long campaign to increase the number of citizens inoculated before winter.

"It has never been easier to get a vaccination," Merkel said in her weekly video podcast. "I therefore ask you: protect yourself and others. Get vaccinated!"

How will Merkel encourage vaccination?

With over 50 million eligible Germans — 62% of the country — now fully inoculated against the coronavirus, the chancellor is hoping to push up that figure to a high enough threshold before the cooler weather sets in.

With this task in mind, health authorities will set up mobile vaccination centers on public transport, mosques and football fields to bring up the numbers from September 13-19.

The chancellor said the campaign made vaccination "simple" as people did not need to get an appointment or pay anything to receive the jab.

A year ago, lockdowns and self-isolation were the only ways to fight the deadly disease.

But Merkel said that "today we can offer this solution: vaccination with safe and effective vaccines."

BioNTech is expecting to get the go-ahead to have children under 12 years old jabbed by mid-October.

What has made the push more urgent?

Rising numbers of daily cases are a cause for concern for politicians, with increasing numbers of unvaccinated patients fighting the disease at intensive care wards across the country.

Around 4 million Germans have already caught the coronavirus and over 90,000 have died, according to Merkel. She said these were "numbers that represent enormous suffering and deep sadness." 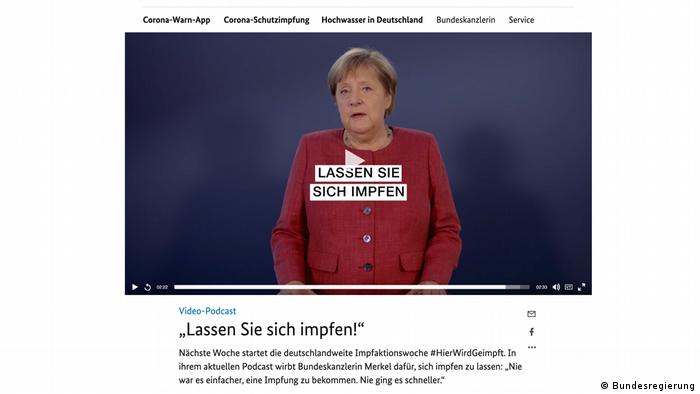 In one of her last messages to the nation as chancellor, Angela Merkel asked people to get vaccinated

The outgoing chancellor wants to now continue what she called the "huge success" of the vaccination drive so far, despite strong opposition from anti-vaccination groups.

But Greens' leader of parliament Kathrin Goering-Eckardt criticized the federal government for "keeping its head down before the election and ... shifting responsibility to the states."

"What we need now is a broad information campaign. From now on, every week has to be action week," said Goering-Eckardt in Berlin. She called vaccination a matter of solidarity.