Are German car makers doing enough to keep up with consumer tastes? Or should they be setting an example? DW-WORLD.DE spoke with an expert on the industry's current approach to environmentally friendly vehicle design. 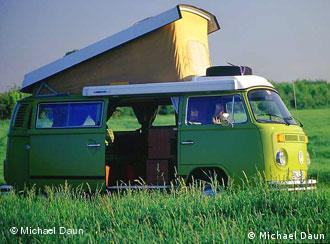 Henning Wallentowitz has chaired the Institute for Automotive Engineering (IKA) at Germany's elite RWTH university in Aachen since 1993. In a conversation with DW-WORLD.DE ahead of the Detroit Auto Show, which opens Saturday, Jan. 19, he explained why German cars are small enough, and why engineers are waiting for consumers to set the pace for further green development.

DW-WORLD.DE: Environmentally friendly auto design is going to be another hot-button issue again at this year's Detroit Motor Show -- will German manufacturers have something to offer?

Henning Wallentowitz: At the Detroit Motor Show there will be some interestingly designed cars, and also some environmental cars. German industry will be there with a BlueTec car from Daimler; it's a diesel with a special additive to make it less polluting. Then General Motors and Opel have an Ecoflex -- an electric engine with combustion engine that could use biofuel, diesel or a pure fuel cell.

I think in the future we are going to see hybrid technology used not only for fuel-efficient cars, but for powerful, fun to drive cars as well.

A former BMW executive was quoted by the Wall Street Journal as saying Germany had "slept through" the hybrid revolution. Is this the case?

No, that is absolutely untrue. In 1992 my institute started introducing hybrid facilities, so we could run and test hybrid and electric vehicles on the grid here. We made the first Ford hybrid, in '93, and gave it to America. But the market was not there to sell hybrids. Not just in Germany, but in all of Europe. There is still no market.

Why aren't they selling here now? In the US it seems hybrid cars are constantly in the news.

The Japanese are selling hybrids in America. But we are quite sure they don't earn money with them. The price for those cars is too cheap to make a profit.

Some people in America have made hybrids into a cause; from what I hear it is a lot of artists and actors. But hybrids make up just one percent of the market. And that isn't going to change in the near future.

Now, all the German companies are working on hybrids, because society is beginning to request it. We'll see how it develops.

So are hybrids the cars of the future? 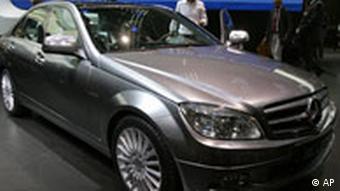 In Detroit, some German makers will be pushing BlueTec diesel cars

The problem with hybrids is you have more weight, and you have a battery in the car. And battery technology is still not developed enough….

In the end you have to wonder how many people will really buy a hybrid. In Germany, car makers already tried "eco-cars" five years ago, the Eco Golf and the Eco Polo (from VW). They had three-liter fuel consumption. But it wasn't a success, it was a disaster. They didn't sell.

The cars were more expensive. There was more technological equipment needed, and the customers didn't like it. And they weren't powerful enough. People will want cars that behave in the same way as their old cars, and won't accept any changes.

One of the most certain ways to reduce CO2 and meet the newer EU standards is to lower fuel consumption. Now we just need to convince consumers to drive these optimized cars.

When fuel was cheaper, the controllers in the car companies wouldn't allow for design costs aimed at lowering fuel consumption. Designing a car isn't just a question of technological ability. It is also a question of profitability.

But with higher fuel costs, this has changed. It's a very interesting time for engineers because we can work on ideas we came up with years ago. I'm very confident that we will fulfill European CO2 emissions requirements.

What kind of changes might car buyers be looking at?

The first changes will appear in the engines -- low-volume engines with high pressure and supercharging are replacing high-volume engines. Then there is cylinder deactivation; gearbox design can reduce fuel consumption dramatically -- we have to tell drivers when to shift, or make an automated gear shift. Then there is dynamic aerodynamic design, lightweight design; and maybe hybrids, or auxilaries like power steering, could be operated on demand by electric drives. It already is in some German cars.

Our institute modified a VW Golf for the Frankfurt Motor Show. It originally emitted 171 grams of CO2 per kilometer, and using already existing technologies we got it down to 131 grams per kilometer. And we haven't even exhausted our possibilities yet.

I'm confident our German cars will be on the road in the future.

What do you say to people who argue that the best way to reduce CO2 output is simply to drive smaller cars?

I think the people who are demanding smaller cars don't know the difference between driving in a larger or a small car. A larger car is much more comfortable and much safer than a smaller car. It's not only fuel economy, but also other features that guide people to buy German cars.

French and Italian cars may be closer to meeting the European limits set on CO2 emissions, but that's only because of their small size. Those cars are good for transport, but they are just not fun to drive.

So you don't see a problem with Germany's apparent determination to continue producing big, heavy cars? 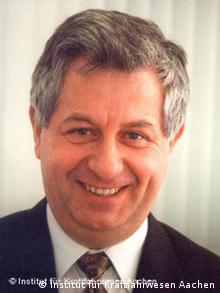 Wallentowitz: "The engineers are ready, and waiting for consumers."

You have to remember -- we have made a lot of headway on fuel efficiency and emissions over the past 30 years. I don't think we are as bad as everyone says.

Thirty years ago we had 10 times more emissions than today. If you compare European regulations from 15 years ago to today, the change has been immense, especially if you look at nitrogen emissions and carbon monoxide emissions. We have environmentally friendly cars already. People just don't want to recognize it.

We engineers joke that in some countries, the air coming out of the exhaust system is better than the air going into the engine. I don't think you can kill yourself anymore by shutting yourself in a garage and letting the car engine run.

Why do the German carmakers continue to fight regulators on meeting CO2 emissions targets? It makes for some bad PR.

Well, it may not be very clever of them in terms of publicity. But then again if you only have a single (CO2 output) figure that applies to all cars in Europe, and you don't differentiate between smaller cars and heavier cars, then the whole problem lands on the shoulders of the heavier cars.

The German car industry wants there to be a certain scale, so that heavier cars can have more relaxed conditions. By having one emissions figure apply to all car companies, you force your customer to buy something other than he wants.

You run one of Germany's top engineering departments. Is "green" design an important topic in engineering education?

I'd have to answer that with a very loud "Yes." We have a special lecture on this topic -- and we are ready to experiment with and develop electric and hybrid vehicles, and fuel-cell vehicles that we can handle with hydrogen in the lab.

But as long as there is no market demand, it is very slow. As soon as the market demand comes, though, our students are prepared.

Europeans are struggling to find the best way to get high-pollutant cars off the streets. While some countries bank on cash incentives, some German car experts believe there are better ways to go. (11.12.2007)

Do you think car makers should set the pace in developing green technologies, or should they wait for consumers to demand it? Please include your name and country in your reply.