A group of artists said it created a website for people to denounce their neo-Nazi acquaintances. But the doxing website was actually a so-called honeypot engineered to get members of the far-right to reveal themselves. 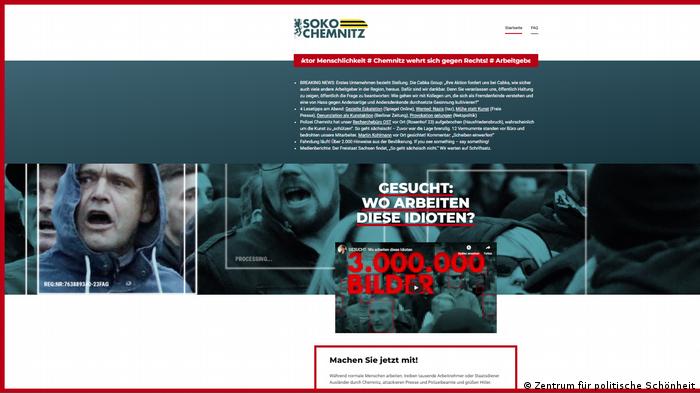 German activists took down a controversial website on Wednesday after revealing that it was a honeypot trap to encourage neo-Nazis to reveal themselves.

A group of artists known as the Center for Political Beauty (ZPS) had previously said that their "Special Commission Chemnitz" campaign was an effort to get people to dox friends, neighbors or colleagues they saw in pictures from far-right demonstrations that took place in the city of Chemnitz earlier this year. The ZPS also promised monetary rewards for the denunciations.

But now the group has revealed that the true nature of the soko-chemnitz.de website was to get far-right supporters to supply their own names, which they did by using the site's search function.

"Thank you, dear Nazis," ZPS wrote on the site, explaining in detail how they used the searches to discover the identities of at least 1,500 participants in the violent anti-immigrant protests in Chemnitz.

"This is the most relevant set of data on right-wing extremism that currently exists in Germany," ZPS founder Philipp Ruch told German news agency EPD.

ZPS said it recorded search terms users entered, usually a person's first and last name, to create a list of potential far-right sympathizers. The average visitor searched for the names of 6.7 friends, according to ZPS. By comparing the names a user searched for with a list of names of people thought to sympathize with the far-right, ZPS expanded the network of potential far-right supporters.

"We built a website with one single goal: To get you to deliver your entire network yourselves without even noticing it," ZPS wrote on its website. "Using the search function you shared more with us than publicly available sources ever could have revealed."

ZPS' initial announcement of the website prompted a flurry of controversy about privacy rights online, and Germany's data protection commissioner's office said it was looking into whether the site was acting within legal limits. The German Arts Council also called the site "problematic."

Shortly after the launch of the site, the ZPS said that an angry mob stormed their office in Chemnitz, and when the police came, they confiscated the group's posters of far-right demonstrators.

Two months after far-right violence and ensuing demonstrations rocked Germany, the German president has made a subdued if cordial visit to the city now associated with far-right extremism. His message: We need to talk. (01.11.2018)