The Center for Political Beauty wants people to identify people who took part in right-wing rallies in eastern Germany during the summer. The group uploaded pictures of some 7,000 demonstrators to its website. 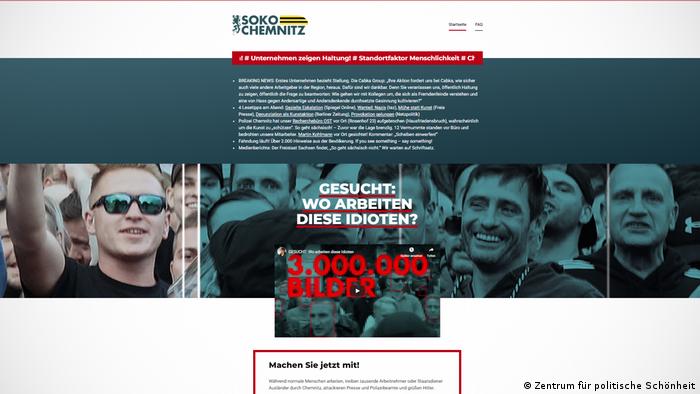 A group of political artists has called on the public to name right-wingers who took part in violent anti-immigrant protests in eastern Germany earlier this year.

As part of its "Special Commission Chemnitz" campaign, artists at the Center for Political Beauty (ZPS) said they would offer a cash reward for anyone who tells them the identity of 7,000 protesters and their employers using pictures uploaded to the group's website.

"Denounce your work colleagues, neighbors or acquaintances today and collect instant cash," the group said. "Help us to remove these problem Germans from the economy and public office." Rewards currently range from around €30 to €120 ($34 - $136), though users have the opportunity to increase rewards by donating money.

Using the internet to discover and broadcast people's identities is known as doxing, and has been used to "out" far-right supporters, racists and xenophobes all around the world. The practice remains controversial, as it involves revealing private information and can lead to repercussions in personal lives, including the loss of a job.

No such private information is revealed on the ZPS campaign site, but users are invited to send in names, addresses, and employers of far-right demonstrators to the organization. Germany's data protection commissioner's office has said it is analyzing the site.

The campaign triggered an altercation on Monday afternoon, when a group of people, described by the ZPS as a "masked mob" on its website, appeared at their office in Chemnitz. The ZPS called the police, who responded by confiscating all the posters showing far-right demonstrators. "The police of Saxony decided within 10 minutes to follow the advice of the angry mob, whose presence violated assembly laws," the ZPS said on its website.

The police statement gave a different account. "Since there were calls on social media to carry out property damage on the offices, ... the police decided to remove and confiscate the posters to prevent danger." The police added that they were assessing the pictures for "any criminal relevance" of publication or display.

Another police statement published later on Tuesday said that the posters described the people pictured as "criminals," which established a suspicion of "defamation," and violated their privacy rights. "These violations may be considered serious, as they would be associated with stigmatization of those affected." the police added. "During the police operation a number of passers-by gathered in front of the shop window, who expressed their displeasure at the posters verbally."

Right-wing groups and members of the far-right Alternative for Germany party (AfD) descended on the city of Chemnitz in Saxony in late August after three asylum seekers were accused of stabbing a German man to death.

Some protesters were pictured doing the Hitler salute. Others attacked pedestrians presumed to be foreign.

ZPS leader Philipp Ruch told the epd news agency that the public could not leave the work of fighting right-wing extremism to politicians and police alone. The time had come, he said, for "denazification" in Germany.

ZPS said the pictures published on its website were publicly sourced, including from Facebook profiles of people who said they had attended the Chemnitz rallies. It has so far received some 2,000 leads from the public.

The group said those identified could have their picture removed from the website if they acknowledged their commitment to Germany's democratic values in writing.

The campaign has raised concerns about the privacy of those alleged to have taken part in the Chemnitz protests.

ZPS previously stirred controversy after it built a replica of Berlin's Holocaust memorial outside the house of AfD lawmaker Björn Höcke in 2017.

Höcke, who leads the AfD in the state of Thuringia, is seen as the face of the hard right within the party.

In early 2017, he denounced the Berlin Holocaust memorial as a "memorial of shame" and called for a "180-degree U-Turn" from Germany's tradition of remembering its Nazi past.