German soldiers exposed to high radiation from radar and later developed cancer are now suing the American defense companies who made the equipment. 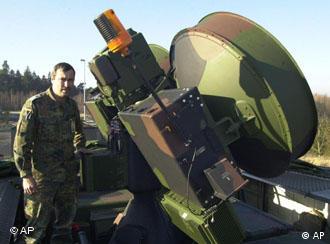 A United States Court in El Paso, Texas, on Monday agreed to hear a case brought on by German Bundeswehr soldiers suffering from leukemia or testicular cancer who claim they contracted their illness after exposure to radar equipment made by American defense contractors like Raytheon, Lucent Technologies and ITT Industries.

The U.S. case was first filed in autumn 2002 by close to 450 sick soldiers, who are seeking compensation that could reach as high as $450 million (€358 million), the German edition of the Financial Times reported. During the first phase of the proceedings, which is expected to continue until June, the court will grant the plaintiffs access to internal corporate documents that could help build their case through July 2005.

Most of the effected workers were mechanics who operated and maintained radar facilities and were consequently exposed to high levels of radiation. They believe those exposures later caused them to develop leukemia or testicular cancer. The alleged exposures took place over more than three decades, from 1958 to 1994.

Berlin attorney Reiner Geulen, who is representing the soldiers, said the decision to take the case was a "considerable success."

"The law said that everybody has to be informed and that protection against radiation has to be granted," said Geulen. "But at that time there was no protection and no information for all the people who operated the devices. You could compare this situation, for example, with x-ray examinations in the hospital that last six or eight hours – and that for 20 days."

But a spokesman for Raytheon countered by saying his company would "energetically" defend itself.

In separate cases, close to 800 German soldiers from the West German Bundeswehr and the army of the former Communist East Germany sued the German Defense Ministry in 2002 for compensation for pain and suffering caused by working conditions involving the radar equipment. Close to 200 of the soldiers have already died. An expert commission researching those conditions came to the conclusion it was "highly probable" the victims were exposed to radiation by the radar devices, Geulen said, according to Reuters.

During the Cold War, American-made radar technology was a common part of NATO defense systems stationed along the border with Eastern Bloc nations. Geulen said that former soldiers in Denmark, the Netherlands and the United States have also filed lawsuits, raising the total number of cases pending in American courts to about 800.

They involve patients like Karl Heinz Bleich, who said he wasn’t informed about the dangers of radiation.

"I was working in a mobile radar unit for two years up until 1969," he said. "I never heard the term x-rays being mentioned in those years, and I didn’t find it printed in any military handbook. Just imagine, we even slept in those trucks right next to the equipment."

A few years ago, committees were set up within the Defense Ministry to caution workers on the radiation danger in certain high-risk jobs, and also to ascertain if the technicians did actually work long enough at their jobs to blame their illnesses on it. The government promised it would quickly process disability applications, and 230 out of 1,800 have already been approved. Many more, however, have not.

Seven of the German cases are to be heard in March in regional courts in Bonn and Franfurt an der Oder (near Poland). Those cases are not expected to have a bearing on the U.S. court proceedings.

Meanwhile, the court has until June 30 to determine whether the individual filings can be combined into a class-action suit. A jury ruling is first expected next year.

The court "ordered a jury decision for March 2002, which is all we wanted, and we’re very glad," attorney Geulen said.

As many as 730 former workers with the German army plan to drag German Defence Minister, Rudolf Scharping to court. They demand compensation for exposure to radiation at Bundeswehr facilities. (Jan. 25, 2002)